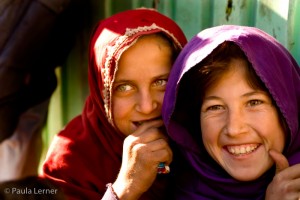 Today Here on Earth: Radio Without Borders will air a program about the hidden lives of the women of Kandahar, Afghanistan. Host Jean Feraca will be joined by photojournalist Paula Lerner. Lerner complied a gallery of photos from Afghanistan for the exhibit “Afghan Stories” available for online viewing and on display in five New England venues in 2008-2009. According to a review by The Bowdoin Orient, Lerner’s photos present a “much different picture of a war-torn country” than images of terrorists like Osama Bin Laden in the mainstream news.

Can photos challenge us to think about war in places like Afghanistan in new ways? What do you think about the future of conflict in the region? Do you have any other alternative images to share? We would like to hear your thoughts on air or in the comments below. You can listen live to the broadcast at 3:00 pm CST either online on the Ideas Network or on the radio if you live in a Wisconsin Public Radio station area. The program will also be included in the Inside Islam radio series podcast as a related show if you wish to listen at a later date.