END_OF_DOCUMENT_TOKEN_TO_BE_REPLACED

Everyone has been watching Egypt since January 25th when the first protests began calling for President Hosni Mubarak to step down after almost 30 years in power. Many have discussed the political future of Egypt should Mubarak leave before the September elections. However, an aspect of the story that has been under-reported is the solidarity between Christians and Muslims in these protests.

END_OF_DOCUMENT_TOKEN_TO_BE_REPLACED

Last Thursday, Egypt unveiled the restored St. Anthony’s monastery near the Red Sea. This monastery is considered to be the oldest in the world. The state-sponsored renovation project has taken 8 years and cost $14.5 million and according to Egypt’s chief archaeologist, Zahi Hawass,  represents how Muslims and Christians coexist and share a heritage. This comes within a month of the shootings on Jan. 6th, the Coptic Christmas eve, in which six Christians and Muslim guard were killed.

While there is an ongoing investigation of the shooting and the incidents of violence between the two groups has increased, events like this are important. As  I mentioned in my post on the January 6th shootings, Muslim and Christian Egyptians share a heritage. It is vital to preserve all aspects of this heritage because I think both faiths call for respect and tolerance of the other. So, while I don’ t think that renovating St. Anthony’s monastery will alleviate the real problems in Egypt or erase the tension, it is a promising gesture and shows that there is a positive past to build on.

Do you think that this renovation represents coexistence between Muslims and Christians? Can projects like this bring people together? Please share your comments below.

Last Thursday, Trijicon, a Michigan based company announced that it would stop inscribing Biblical references on gun sights for the military. This came after many groups, including the Interfaith Alliance and the Council on American-Islamic Relations, condemned the practice. These inscriptions gained attention after ABC News aired a story about the weapons, referred to by some as “Jesus guns,” with references to New Testament passages.

The obvious discomfort with this practice stems from the military’s policy against proselytizing and also from the reaction by people in predominantly Muslim countries to the idea that a gun used against them had Biblical references. In addition, there is the fact that Muslims in the US military, as well as Iraqi and Afghan soldiers who are being trained by the US, may end up using these weapons. END_OF_DOCUMENT_TOKEN_TO_BE_REPLACED

In last week’s post about Muslim-Christian tensions in Egypt, I highlighted that I am troubled by the way that two connected faiths that call for tolerance are often manipulated for specific purposes. As a follow up to that post, I wanted to write about the violence last week between Christians and Muslims in Jos, which stands on the dividing line between predominantly Muslim northern Nigeria and predominantly Christian southern Nigeria. This is another unfortunate example in which religion is  manipulated and used to cover other longstanding problems between groups, rather than addressing those problems directly, problems which many times result from poverty, oppression by both groups, and unemployment.

The violence in Jos began on Sunday, January 17th, and has resulted in the deaths of hundreds. There are varying reports on what triggered the current wave of violence. The New York Times reports it began when Muslim youth attacked a church; The Christian Science Monitor says that it broke out after Christians protested the building of a mosque and Muslim protesters attacked a church; and Human Rights Watch indicates that some leaders say the violence resulted from a disagreement over the rebuilding of a Muslim home in a Christian neighborhood that was destroyed in 2008. Whatever the exact cause of this latest violence, it is important to note that unfortunately this is not the first time that this level of violence has occurred. There were violent riots in 2001 and 2008. END_OF_DOCUMENT_TOKEN_TO_BE_REPLACED

A mosque and a church in Egypt

While Egypt is a Muslim majority country, it has a significant Christian minority, about 10% of the population. Although relations between the groups have fluctuated over time, recent trends have unfortunately been towards increased tension. With the recent shootings on January 6th, the Coptic Christmas Eve, outside a church in southern Egypt, many are worried about an increase in violence. What is ironic and sad about the situation is that many Muslim and Christians have friends from both religions and share many common cultural traditions. Moreover, both faiths call on their believers to demonstrate tolerance and kindness towards others. END_OF_DOCUMENT_TOKEN_TO_BE_REPLACED 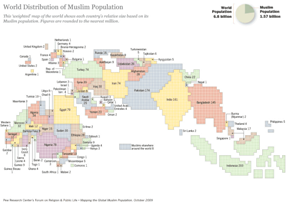 A couple weeks ago, the US Pew Forum on Religion and Public Life published a study that has received a great deal of attention. According to a three-year study of over 232 countries, the population of Muslims worldwide is now 1.57 billion, which means that one out of every four people in the world is a Muslim. Although the number was above some of the researchers’ expectations, what really makes this study fascinating is what it discovered about the details of this overall population. END_OF_DOCUMENT_TOKEN_TO_BE_REPLACED

There have been many times that I have gone on trips and was “Flying While Muslim.” What does that mean? Well, this expression has come to describe the reality of travel for all Muslims, non-Muslim Arabs, and anyone who looks like they could be from the Middle East or any other region of the world perceived as predominantly Muslim. After 9/11, Muslims, Arabs, and South Asians became the target of racial and religious profiling that has resulted in longer waits in security and in some cases being removed from flights. END_OF_DOCUMENT_TOKEN_TO_BE_REPLACED