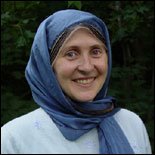 “By segregating [men and women during prayer], you sexualize the area in ways that it wouldn’t be sexualized if the area was mixed.”

Those are the words of Pamela Taylor, a European-American female imam who embraced Islam twenty-five years ago. This past Tuesday, Taylor led a mixed congregation of 50 men, women, and children observing the Eid Al-Adha prayer. There was nothing particularly exceptional about the content of the annual prayer, or khootbah (sermon), that followed, but a female Imam leading men and women praying side-by-side is anything but typical.

END_OF_DOCUMENT_TOKEN_TO_BE_REPLACED

The last Inside Islam radio show examined Islamic Feminism. The two guests, Sumbul Ali-Karamali and Areej Zufari, talked about the global movement where Muslim women are going back to the Qur’an to assert their rights. In other words, they are calling for a re-reading of the Qur’an that reflects its true attitude towards the plight of women, where both women and men are addressed by God as human beings. Both Ali-Karamali and Zufari highlighted that what was interesting about this new movement is how inclusive it is and how women’s voices are central to the project. END_OF_DOCUMENT_TOKEN_TO_BE_REPLACED

Islamic feminists seek to transform patriarchal readings of the faith that they argue go against the real message of the Qur’an where there is a clear emphasis on gender equality based on the concept of human beings.  According to Margot Badran, Islamic feminism calls for more gender-sensitive re-readings of verses that are not present in the male interpretations. END_OF_DOCUMENT_TOKEN_TO_BE_REPLACED