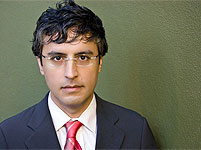 Dr. Reza Aslan joins us today on Inside Islam.

Today’s guest post is from Daily Beast blogger and author of How to Win A Cosmic War: God, Globalization, and the War on Terror Reza Aslan. If you’d like to learn more about his new book, see the interview posted today by Editor-and-Chief of  altmuslim Shahed Amanullah. Later this month, Dr. Aslan will return as a guest on Inside Islam’s radio series to be interviewed by host Jean Feraca. Feel free to comment at the end of today’s guest post, or send us an email with your thoughts for Reza before the radio broadcast on May 13 (3 pm CT). Jean may read your comments on the air.

Dr. Aslan’s earlier appearances on Inside Islam are available through the links below, followed by his guest post.

END_OF_DOCUMENT_TOKEN_TO_BE_REPLACED

The blog altmuslim is dedicated to advancing a progressive image of Muslims in the media and throughout the world, an objective shared by us here at Inside Islam. Founder and Editor-in-Chief Shahed Amanulla created the site after the September 11th, 2001, terrorist attacks in the US. His site still has the same aim now that it did then: to counteract the negative representation of Islam in mainstream media reports, where the dominant image is of terrorist groups like al-Qaeda. Seven years later, with associate editors based in the US, UK, Australia, and Canada, as well as contributors from around the world, altmuslim hosts a diverse Muslim community online. Shahed and his team continue to present an alternative image for Muslim politicians, intellectuals, comedians, and other prominent figures in the public eye.

END_OF_DOCUMENT_TOKEN_TO_BE_REPLACED

Host of the award-winning podcast Islamophonic and journalist for the Guardian UK Riazat Butt takes a critical and witty look at the Muslim community beginning at home in her native Great Britain. Each month, the program deals with complex cultural and political issues in the news by tackling topics like marriage, extremism, secular democracy, and others.

Riazat refrains from making overarching conclusions about Islam without buffering them with humor. Also, the programs rarely deal with spiritual matters. Instead, Islamophonic tackles the difficult task of reporting the individual stories of living in Muslim world.