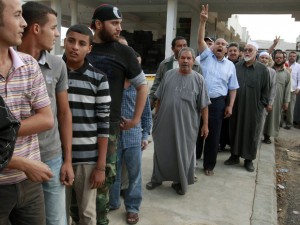 Weeks after the Colonel’s death, attention is now shifting from Moammar Gadhafi to the importance of establishing a new order for Libya and its people. It is safe to say most people are very happy that Gadhafi is gone, and gone for good. While I am just as excited as the next person and optimistic for a brighter future, I can’t help but to be disgusted by the images and videos that were publicized in the media around the demise of Gadhafi. The images were quite disturbing, an old man wiping blood from his face saying “God forbids this” while guns were being shot and chaos everywhere, then later people posing with his bloodied body all while smiling and giving the peace sign with their fingers. END_OF_DOCUMENT_TOKEN_TO_BE_REPLACED