Allah is often (mis)understood as the Muslim God. However, “allah” is simply the Arabic word for “god”; thus, Arabic speakers from other faith traditions will also use that word. In Islam, Allah is not only known by this name, but is also known by attributes that are found in the Qur’an and the hadith of the Prophet Muhammad. Commonly, Muslims say there are 99 terms that are considered to be both names as they refer to God and attributes because they describe different aspects of God. These attributes all refer to the singular being of God, but are representative of various traits. A metaphor for these attributes given by Hamza Yusuf, a well-known scholar, is the numerous colors that appear when light is refracted. END_OF_DOCUMENT_TOKEN_TO_BE_REPLACED 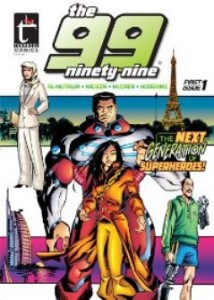 In July 2006, Naif al-Mutawa, a Kuwaiti clinical psychologist, launched the first Islamically themed superhero comics. Al-Mutawa began the series “The 99” to provide Muslim children with superheroes with whom they could identify. Perhaps surprisingly, half of the heroes are females. The name of the series stems from the 99 attributes of God outlined in the Qur’an, the holy text of Islam. Each of the 99 heroes embodies one of the attributes and represents some aspect of the core Islamic values. All the characters also come from different countries from around the world and thus represent the diversity of the worldwide Muslim community. END_OF_DOCUMENT_TOKEN_TO_BE_REPLACED