Amna Ahmad, New York City high school oral historian, This is Where I Need to Be project

The old saying “children should be seen, but not heard” still rings true today. Although the majority of the population in many countries is younger than 25, youth perspectives are rarely, if ever, taken seriously. This is especially true for those under the age of 18 and those who come from minority groups such as people of color or Muslims. This Is Where I Need to Be: Oral Histories of Muslim Youth in NYC attempts to break these barriers by providing a platform for diverse young Muslims of color living in New York City to voice their perspectives. You can watch a video clip of Palestinian-American Amna Ahmad’s reading of Bengali-American Taseen Ferdous’s contribution to the book.

Even though New York City is one of the most tolerant and diverse places in the world, after the events of September 11, 2001, many Muslims experienced harsh discrimination and even violent attacks. Ignorance about Islam created a hostile atmosphere and many Muslim youth were regularly harassed at school by their peers. This is especially significant in New York, where 1 in 10 public school students is Muslim, totaling over 100,000 students in the five boroughs. 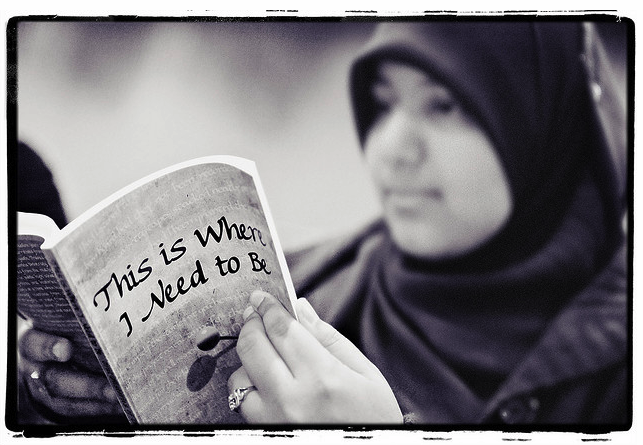 The This Is Where I Need to Be project was carried out by New York Muslim youth from various ethnic and class backgrounds. Supported by researchers at Teachers College Columbia University and rooted in the importance of public schools in shaping societal attitudes, the project goal’s was to combat prejudice by providing youth with the appropriate space to voice narratives countering stereotypes.

Husein Yatabarry, New York City high school oral historian, This is Where I Need to Be project

Most importantly, many contributors to the anthology defined themselves not through direct responses to negative expectations, but by telling their own stories on their own terms. And the inspirational messages of the contributors have moved educators across the country to include the book as part of their teaching curriculum.

It’s important to point out that the project’s aim isn’t solely to educate non-Muslim Americans. As Rahimah Ahmad, a Muslim African-American teen contributor from Manhattan, said,

During the interview process, I realized that it’s not just people who aren’t Muslim who assume things about Muslims. We Muslims do this, too. I really hope this book will demolish many of the common assumptions people make about Muslims-for Muslims and non-Muslims alike.

Along with other efforts such as the U.K.-based Muslim Youth website and the Canadian-based website of the same name, This Is Where I Need to Be is yet another example of the power and significance of voicing one’s opinion. Youth, whether Muslims or otherwise, may always struggle to achieve the level of respect they deserve, but they will continue to carve out creative ways to communicate their ideas and express their true selves on their own terms.

If you’re a Muslim youth under the age of 25, in what ways do you think your voice is heard? In what ways might This Is Where I Need to Be change perceptions of Muslims and Islam in the US?  Please share your thoughts and experiences below.

2 thoughts on “This Is Where I Need to Be”