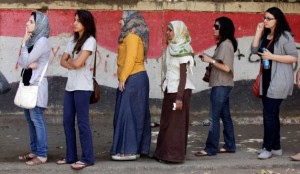 Egyptian women wait in line to vote in Cairo during the May presidential election. Photo: Amr Nabil/AP

With the Egyptian presidential run-off election approaching, I thought that I would gain more perspective on the political transitions of other Muslim-majority countries. In a conversation with Inside Islam, Paul Kubicek, political science professor and recent presenter at our Islam and Democracy Conference, offered his thoughts on the similarities and differences between the political systems of Turkey, Egypt, and other emerging democracies in the Middle East.

Inside Islam: Do you think the future role of Islam in Egyptian politics in the coming months will accurately reflect the beliefs of Egyptians regarding that role? In other words, whatever emerges from these elections, are the results likely to reflect Egyptian society?

Kubicek: Political Islam in Egypt, it seems to me, is split between some elements in the Muslim Brotherhood who look favorably on aspects of the “Turkish model” and other elements in the Brotherhood and the so-called Salafists who have yet to reconcile Islam with liberal democratic norms. They are far more eager to impose Islamic law on Egyptian society, for example. Judging from public opinion data, a good number of Egyptians would welcome this, but how far they would want Islamic law to actually go is unclear. However, I think it is safe to say that the average Egyptian is less oriented toward a secular viewpoint than the average Turk. Public opinion data support this with regard to women’s rights as well as the role that should be played by Islam in developing legal codes.

Kubicek: In many ways, Turkey has an intuitive appeal. It looks quite successful viewed from Cairo, Tripoli, or Tunis. However, Turkey’s democracy has taken many years to develop. It has strong native roots. It has been cultivated by the prospect of EU membership. It is grounded in a strong secular vision of society. Its Islamist parties have been forced to moderate their position over time and have arguably learned lessons from past failures. I think there are some basic similarities, particularly among secular-oriented Arabs in terms of the desire to adopt Western norms and practices and “catch up” to the “developed” world. The question is whether the Islamist parties, which will inevitably play a role in the post-Arab Spring, agree that Islam can be reconciled with a secular political system.

Furthermore, without the carrot of EU membership and the stick of a military that might intervene lest the civilian politicians push Islam or a non-democratic agenda too far, the prospects for success in Egypt and Tunisia are less likely, although not impossible. Tunisia seems to have a good start, Egypt far less so, and there is much uncertainty about how that transition will proceed. Lastly is the issue of expectations. Arab societies have big problems. Democratization will not solve them all, and it may make some conflicts more serious. It is uncertain how patient Arabs will be with their new “democracies.” In the case of Turkey, the The Justice and Development Party (AKP) has been able to deliver the economic goods more capably than its predecessors, which has given it a lot of credibility.

Kubicek: The AKP in Turkey is often described as an “Islamist” or a “mildly Islamist” party. It does have roots in earlier incarnations of political Islam in Turkey. However, as an outsider, it appears to me that the AKP wears its Islamic credentials very lightly. It views Islam as part of Turkish culture and is something that deserves respect and should not be repressed, but the AKP, in my view, is perfectly comfortable in a secular state and does not have a grand plan to “Islamicize” Turkish society. Its “Islamist” agenda has included advocating for the right for women to wear a headscarf while attending university–not mandating, as in Iran or Saudi Arabia, that they do so. Judging from their electoral success, their view corresponds well with a large number of Turks–Turks who want to pray and enjoy civic freedoms and enjoy a strong economy. Indeed, the AKP’s main constituency seems to be a rising bourgeoisie in central Anatolia, a class that is pious but also profiting from globalization.

What do you you think of Kubicek’s assertion that “Arab societies have big problems. Democratization will not solve them all”? Throughout history, democratic movements have required long periods of time before progressive and systemic changes developed. How might a 24-hour news cycle struggle to capture the complexities of a slow-moving evolution such as democracy? Please share your thoughts below.