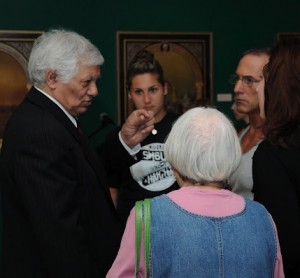 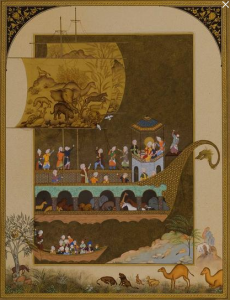 Following a two-year study of four sacred texts—the Avesta, the Torah, the Qur’an, and the Bible—Hatemi created a number of paintings as part of an exhibit entitled Stories of the Messengers. In response to the ignorance and hatred toward Muslims after September 11th, Hatemi saw the common messages within faith traditions as an obvious starting point for education and dialogue, and his brilliant pieces, painted in the classical Persian miniature style, as the non-verbal conversation starters.

Stories of the Messengers has been shown in Kentucky, Virginia, and other states across the country and has served as a reminder of the commonalities among religions for visitors. In an interview with Inside Islam, Hatemi said that he picked religious events that are commonly recognized among two or more faith traditions. Some of the paintings in the exhibit include: Adam and Eve, Arch of Noah, King Solomon‘s Treasures, and Birth of Jesus. Under each painting, Hatemi has placed the commonalities among religious texts that speak of that specific belief or event.

Hatemi’s son, Lachin, a physician, and the head of his father’s outreach programs, explains:

A lot of people when they read all of them [quotes from religious texts] side-by-side, they begin to understand. … It’s kind of an incredible reaction. … [most people] They talk about their own books, but they don’t read about the other ones. … But when they’re exposed to such things, they take it very well.

The inspiration for an interfaith focus came out of Hatemi’s re-reading of Mevlana Jelaluddin Rumi’s 13th century sufi poetic masterpiece, Masnavi. The universal beauty of peace emphasized in many of Masnavi’s 25,000 verses sparked Hatemi’s attention toward the powerful potential of interfaith dialogue.

The verse that struck Hatemi most and served as the foundation for the project was one of Rumi’s most famous quotes:

I hold to no religion or creed, am neither Eastern nor Western, Muslim or infidel, Zoroastrian, Christian, Jew or Gentile. I come from neither the land nor sea, am not related to those above or below, was not born nearby or far away, do not live either in Paradise or on this Earth, claim descent not from Adam and Eve or the Angels above. I transcend body and soul. My home is beyond place and name. It is with the Beloved, in a space beyond space. I embrace all and am part of all. 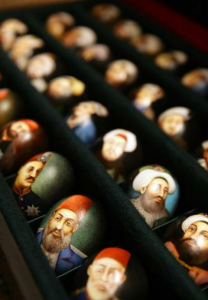 Rumi’s words are commonly spoken in Hatemi’s native Iran during shab-e she’r, or the night of poetry, a non-religious community gathering where poetry is shared among the young and old and an important Persian tradition for all faith traditions, including Islam. It was this kind of multicultural experience early in Hatemi’s life that influenced his interest in highlighting universalism in his paintings.

At 15, Hatemi left his Azerbaijani village in Iran for the renowned Tabriz School of Art. He went on to the Fine Arts Academy at Tehran University and eventually landed in Istanbul where he learned to experiment with both eastern and western forms of art. Known as the “Istanbul Painter,” Hatemi’s pieces are often a blend of many his influences: Persian and Ottoman, Eastern and Western, Iranian, Turkish, and American.

Often cited as the only remaining painter of the Ottoman style, Hatemi’s abilities are sought after around the globe. He has painted a number of pieces for top dignitaries, including the Sheikh of Qatar, whose personal collection of Hatemi’s art will become the centerpieces of a future palace museum.

Hatemi’s latest exhibit features a number of pieces capturing scenes from Ottoman Istanbul and reminds viewers of the import role the city played for Jews, Christians, and Muslims. During a recent gallery opening in New York, Professor Mustafa Gokcek spoke of how many Jewish families escaped the Spanish inquisition and lived in Istanbul under the protection of the Muslim-majority Ottoman empire for centuries. Hatemi told Inside Islam that the peaceful coexistence during the Ottoman empire was another motivation for sharing his latest paintings with Americans of all faith traditions. He sees his art work as valuable in itself, but wants to reach out to non-Muslim American through his paintings amid what he sees as an unnecessary tension between Iran and the U.S.

What do you think about Hatemi’s work? Are gallery exhibits with an interfaith focus all for show, or do they have a real impact on how people view different religions and cultures? Please leave your comments below.