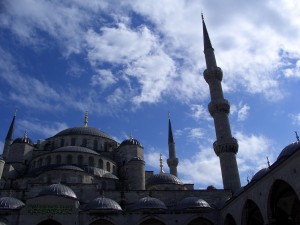 The underlying significance of the Ramadan tradition of abstaining entails multiple layers of symbolism. At the most basic level, the month is viewed as a time to enact a heightened sense of kindness, an opportunity to shy away from conflict, anger, and criticism, and to ask for forgiveness. It is intended for Muslims to personally experience hunger and thirst, and empathize with those who have  insufficient amounts of food or drink. This 9th lunar month is also typically a time when Muslims give significant portions of the required alms, or zakat—2.5% of a person’s total wealth and one of the five pillars of Islam. (For a Lahori Ahmadiyya Imam’s perspective on charity in Islam see this.)

Sufism, the mystical tradition or “heart of Islam” as some followers describe it, focuses on the metaphysical nature of Islam, and views the fasting component of Ramadan through this spiritual lens. Sufi scholar Seyyed Hossein Nasr describes the fasting component of Ramadan as a way for one to create an empty space within which “the Divine message descends.” The biological desires for food, drink, and sex—yearnings for nourishment—are really symbolic of one’s yearning for The Nourisher, or Al Razaq, one of the 99 names of God. Nasr says that since all nourishment comes from The Nourisher, one’s hunger, thirst, or lust is at its most basic level a desire for unification with The Creator.

From his 1981 book, Islamic Life and Thought, Nasr writes,

As the Taoist saying affirms, it is the empty space of the wheel which makes the wheel. It is only a certain degree of restraint from the material objects of the senses that makes even the life of the senses balanced, not to speak of making possible an opening in the human soul for the spiritual life. Ramadan is an opportunity for Muslims to impart a particular focus upon cleansing one’s heart, soul, spirit through the fast.

So while the external acts of Ramadan are visible and evident, it is the metaphysical meaning behind Muslims’ intentional cleanse that give these acts of worship their significance.

What meanings does fasting mean to you? What do you think of Nasr’s perspective on the symbolism that fasting holds for one’s yearning to connect with God? Please leave your comments below.

4 thoughts on “Ramadan, Beyond the Fast”