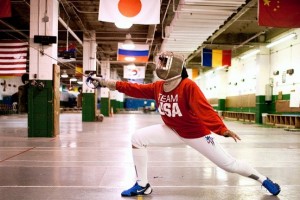 I pray that my achievements pave the way for other minorities that come after me. I hope my story inspires them to dream big and never allow their religion, race or gender to hinder them from accomplishing their goals. My hijab and religion brought me to a sport I never would have discovered otherwise and I am thankful every moment of every day. 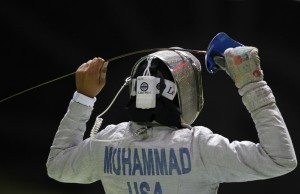 If anyone thought that Muhammad’s award was an obvious choice because there are few competitive and accomplished female Muslim athletes, they would be wrong. Thirty-five-year-old Muslim-American weightlifter Kulsoom Abdullah and 17-year-old Afghan Sadaf Rahini, one of the top young female boxers around, were the runners-up for the top spot.

Female Muslim athletes are becoming less of an anomaly all around the world. In 2004, Bahraini sprinter Roqaya Al-Ghasara was the first ever woman to wear a head scarf and compete in the Olympics, reaching the semifinals during the 2008 summer games in Beijing. The Iranian women’s national soccer team, ranked 57th in the world, might have qualified for this summer’s Olympic games, however FIFA’s discriminatory, politically based ban on headscarves will prevent the team from taking the international stage. And although Jedah United may be far from the next up and coming women’s Olympic basketball team, this coastal Saudi Arabian school recently departed from the country’s ban on officially organized, publicly played sports for girls, putting up basketball hoops in its high school gym. This past February, Saudi Arabia fielded its first ever women’s soccer team in an international competition.

Islam can present challenges for some Muslims participating in a few activities that are shared and loved around the world. Athletic competition is one of these areas, but it has become increasingly clear that the largest barriers to Muslim participation, from both men and women, are not related to the actual religious restrictions. It is the preconceived notions and cultural expectations around gender and dress that lead to both Muslim families and western-based athletic institutions prohibiting some Muslim women and girls from competing.

Olympic fencing hopeful Ibtijah Muhammad avoided a great deal of controversy by choosing a sport that requires modest dress for safety reasons. Her passion for fencing is obvious, and the benefits of her accomplishments should be celebrated, but her story makes me wonder if young Muslim women might be encouraged to become volleyball players, take up tennis, or play rugby. Increasing athletic opportunities for Muslim women and girls would be good for those individuals, their communities, and rarely mentioned, for the sports themselves.

What do you think? Will female Muslim athletes help break down negative stereotypes of all Muslim women being submissive and restricted, or are a few international stars simply exceptions?