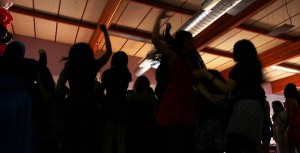 The dream of one Bengali-American Muslim girl came true last week, when over 100 girls packed a local hall to dance, eat, and pray as part of Hamtramck High School’s first ever all-girl  prom. The story has made the New York Times, Boston Globe, and other international media giants, and has created some interesting discussion around gender in Islam and religion in the public sphere.

The 22,000 residents of Hamtramck, Michigan, were predominately of Polish origin a decade or two ago. Hamtramck High School, just minutes from downtown Detroit, is now a mixture of immigrant families of South Asian, Middle Eastern, and Polish descent, and the values of its students have changed with the demographic shift. A mixture of cultural expectations and religious interpretations led Hamtramck Senior Tharima Ahmed to her personal initiative to create a fun and comfortable space for a significant minority of Hamtramck’s students. Given the importance of the senior prom dance in American culture, Ahmed dreamed of attending such an event. But for whatever reason—whether her family’s cultural expectations, her own interpretation of Islam, or her personal discomfort being around boys in a sexualized social environment—she knew that only an alternative prom would be acceptable.

And she wasn’t alone. Ahmed led a school-wide survey of girls about prom, and 65% of respondents indicated that they were not allowed to attend a mixed-gender dance. After numerous bake sales totaling $2,500 in profits–and a lot of hard work–Ahmed and a few other Hamtramck girls turned the all-girl prom from a dream to a reality.

When it was all over, the New York Times reported that 100 girls of Yemeni, Polish-American, Palestinian, Bosnian-American, and African-American backgrounds attended the dance. Some girls dressed in attire that revealed their hair and other parts of their bodies that no one had seen in “public” before. Of course, no boys or men were allowed, but the Times reported that it was a “coming out” party for a few of the Muslim attendees. Others chose to wear more conservative clothing, in line with their daily choice of dress.

The Hamtramck High School story highlights a number of topics related to modesty, sexuality, and gender that we’ve previously written about. Issues around gender mixing, with a disproportionate focus upon a woman’s physical appearance, are common topics discussed by Muslims all around the world. However, given the diverse makeup of Muslims in the U.S., there is an even larger range of interpretations around gender and sexuality.

Regardless of where one stands on Islamic interpretation of hijab, gender mixing in social situations, or other issues related to sexuality and modesty, almost everyone can agree on one thing. Tharima Ahmed and a few of her friends at Hamtramck High School have inspired thousands of other young girls around the world to break boundaries and find creative alternatives that respect cultural and religious expectations. What prom means in America is being redefined, and it all started with the dream of a seventeen year-old Muslim girl from a working-class neighborhood in Michigan.

Were you unable to go to prom because of religious or cultural expectations? Are separate events and activities for boys and girls necessary for communities that are referred to as “socially conservative” in an American context? Please share your thoughts and related experiences below.