This is the last in our Green Faith series before tonight’s panel discussion in Madison, WI. Panelists will address the following the questions: What aspects of scripture and  practice support or challenge  environmentalism? With such a strong focus on the afterlife, why do Abrahamic faith traditions care about protecting the earth in this life? How can faith-based and non-faith-based organizations work together more effectively on environmental issues?

Earlier posts in this series covered Muslim, Christian, Jewish, and Baha’i perspectives as well as an Inside Islam radio show on interfaith dialogue around environmental issues.

Anna M. Gade is an Associate Professor at UW-Madison in the Department of Languages and Cultures of Asia and Religious Studies. She teaches courses on global Islam, Southeast Asia, and approaches to the study of religion.

K.H. Ahmad Yani is the “kiai,” spiritual and academic leader, of Darul Ulum Lido, an Islamic boarding school near Bogor, an hour’s drive from Jakarta, the capital of  Indonesia. Traditional and modern residential religious schools like Darul Ulum are known in Indonesia as “pondok pesantren,” and there are thousands of them across the vast archipelago of this Muslim-majority nation.

Darul Ulum Lido is also known as an “eco-pesantren,” a relatively new term for an old idea in Muslim Indonesia. The School leads nationally in developing programs to demonstrate Indonesian and Islamic traditions of environmental care, working in cooperation with national and international organizations. For example, Darul Ulum Lido is the site of a “Harim Zone,” an area set aside for the preservation of water and land, a conservationist idea and practice that is mentioned in some of the oldest Islamic religious sources. At this religious school, students are expected to carry out ecological activities, such as required clean-up of the nearby riverbed one morning a week, as part of their learning curriculum. 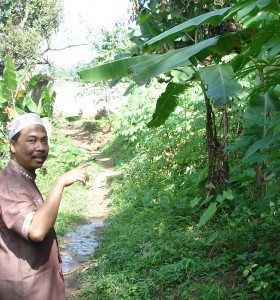 In the short video above, K.H. Ahmad Yani offers ideas that correspond with the practices of Muslim religious ecology at his school. Qur’anic themes that inspire contemporary Muslim religious ecology, such as “mizan” (balance”), “amanah” (trust) and “khalifah” (“stewardship”), and the command not to “oppress” (zalim) the Earth, are already familiar to many as aspects of global Islamic ecological thought. Here, K.H. Ahmad Yani presents further ideas about religion and ecology from an Islamic perspective, drawing on popular Muslim religious sources, including accounts known as hadith (the reported sayings and actions of the Prophet Muhammad).

K.H. Ahmad Yani’s perspective represents mainstream Indonesian perspectives on the general topic of Islam and environmentalism today. In addition, the themes of the teaching he provides are also typical of many Southeast Asian perspectives on religion and ecology, particularly in the way that they draw a connection between human care and compassion for creation to divine mercy, forgiveness and protection.

Join us tonight at 6 PM at the Pyle (Room 235), 610 Langdon St, in Madison, Wisconsin to hear Gade and others speak about faith-based environmental practice and activism.

One thought on “TONIGHT: An Interfaith Conversation on Faith and Environmentalism”