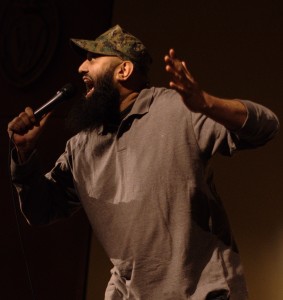 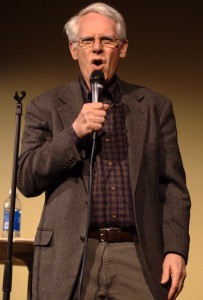 Usman and Alper have been performing together for years, and their show was part of an interfaith collaboration between the UW-Madison Muslim Student Association, the Lubar Institute for the Study of Abrahamic Religions, Hillel, and a host of other faith-based organizations. Through their comedy and post-show discussions, Usman and Alper hope to shed some light on the similarities between the two faith groups and relieve some of the unnecessary tension that has grown post-9/11.

I got a chance to sit down with Usman and learn more about his transition from practicing law to the world of comedy. He spoke of his family’s lack of surprise when he told them his desire to be a professional comedian. They already thought he was crazy:

I asked Usman about his friendship with Alpert and his family and their working partnership. This is what he had to say about that relationship:

I also asked Usman how he feels about what many believe to be an increase in Islamophobia around the U.S. Usman strongly disagreed and characterized the prejudice and fear towards Muslims as relatively unchanged since the first few years following 9/11. Listen below for more details.

At the end of his performance in Madison, Usman threw a curve ball at the audience

I’ve really come to believe that we’re all the same. And I don’t mean that as some … kind of superficial, shallow … bumper sticker type of thing. We really are…because you’re a bird in a cage. You were a bird before your cage. You’re a bird inside the cage, and you’ll be a bird after the cage. But never forget, you are a bird, you are not the cage.

He went on to clarify:

You can listen below to hear more about his explanation of spirituality and the origins of his comedy sketch philosophy in the great Sufi mystic masterpiece, Farid ud-din Attar’s Conference of the Birds. And of course, there’s more fabulous background music and Usman’s jokes poking fun at me. Click below to listen.

Can the combination of Usman’s physical appearance and jokes make Americans more comfortable with Muslims? Can the Usman-Alper comedy collaboration help ease tensions between Muslims and Jews? What do you think of Attar’s ‘Bird in the Cage’ perspective of spirituality? Please leave your thoughts below.

One thought on “Muslim-Jewish Comedy”