This is the latest in our Green Faith series leading up to a panel discussion on March 6th in Madison, WI. Earlier posts in this series covered Muslim and Christian perspectives as well as the Inside Islam radio show on interfaith dialogue around environmental issues.

Laurie Zimmerman is the Rabbi of Congregation Shaarei Shamayim in Madison, Wisconsin. She is an avid lover of the outdoors and sees environmental conservation as an important component of a broader social justice movement. 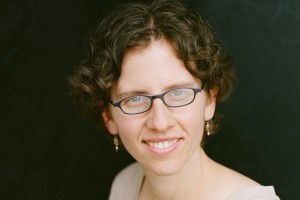 The year after I graduated from college I set off on my own to hike the Appalachian Trail. During the day I slugged through the rain or sweltered in the scorching sun. At night I shivered in my sleeping bag or fought off mosquitoes. Never before had I experienced Mother Nature so intimately. It was both extraordinary and challenging. I had hoped that I would settle into a rhythm and achieve a meditative state as I gritted my way up each mountain. On most days, however, I struggled with boredom, loneliness, and exhaustion.

Nevertheless, I grew to love the rough, raw beauty of the wilderness. I felt at home on the trail. I was in awe of God’s glorious earth each day I climbed a mountain. Every morning I would begin my hike with prayers of gratitude for being alive, for the gift of walking through God’s majestic world. I developed a deep appreciation for the infinite wonder of the earth. This awe carried me through three months of intense hiking and comforted me when I felt depleted.

I had always felt a strong connection to the natural world, but hiking over a thousand miles of the Appalachian Trail deepened that connection profoundly. I became keenly aware that our earth is both precious and fragile and that human negligence, recklessness, and greed are quickly destroying it.

I believe that human beings have a moral responsibility to preserve and protect the earth. The ancient rabbis tell a midrash, or story, that serves as a paradigm for Jewish environmental activism: When God created the first human being, God led Adam around the Garden of Eden and said, “Look at my works! See how beautiful they are – how excellent! Everything I created was for your sake. Be mindful that you do not spoil and destroy My world, for if you do there will be no one to repair it after you.” (Midrash Kohelet Rabbah 7:13)

I wonder what Adam thought when God led him around the Garden. He must not have taken God very seriously – after all, how could he have imagined that future generations of human beings would be responsible for such environmental degradation and destruction? How could he have imagined that human beings would have the capacity to pollute, plunder, and wreak such havoc on the environment?

If we truly cherish God’s earth, we must not stand idly by, for this is not acceptable. Those of us in the world’s richest 7% are playing a tremendous, unequal role in the earth’s destruction. Corporate power is fueling and sustaining overconsumption, insufficient government regulation, and a lack of accountability. We have a responsibility to speak out against this.

Judaism teaches, “Tzedek, tzedek tirdof – Justice, justice you must pursue.” We must pursue justice by putting forth a vision of a fair, safe world for all people, a world where we share the earth’s abundance equally and respectfully, a world where we care for each other and for the magnificent earth that sustains us. For if we do not, and if we spoil and destroy God’s world, there will be no one to repair it after us.

If you are in the Madison area, join us next Tuesday, March 6th, at 6 pm in the Pyle Center on the UW Campus. Rabbi Zimmerman will be among the panelists who will speak on the connection between faith and environmentalism as part of our event Green Faith: An Interfaith Conversation on Eco-Consciousness and Environmentalism.