This is the latest in our Green Faith series leading up to a panel discussion tomorrow, March 6th, in Madison, WI. Earlier posts in this series covered Muslim, Christian, and Jewish perspectives as well as an Inside Islam radio show on interfaith dialogue around environmental issues. 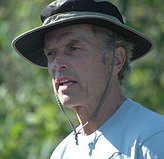 A practicing Baha’i, Don Quintenz has been involved in environmental education for over four decades. Quintenz has worked for the Wisconsin Department of Natural Resources, the Wisconsin Humane Society, the Milwaukee Public Schools, and is currently the Director of Education and Land Management at the Schlitz Audubon Nature Center in Milwaukee.

In 1967 I came to recognize two goals that would ultimately dominate the rest of my life. My first realization was that I wanted somehow to inspire people to continually develop their spirituality. I didn’t feel that people could simply believe a particular doctrine and therefore realize all the potential benefits it could bestow. The second awareness I received was I wanted more than anything else to try to instill in people a love for the natural world. I feel these two goals are more related than you might suspect. Part of the reason for this is my belief in a Creator; and a necessary consequence of that belief is nature must be an expression of God’s will.

There are differing opinions on how to accomplish these two goals. Why is it taboo in society to discuss spirituality when it is probably the most valuable thing we can learn? I personally believe that open-minded conversation and learning what others believe is a fundamental starting point.

After 45 years of teaching environmental education, I have become convinced that what is lacking in humanity’s relationship to the natural world is the motivation to do what we know we must do. The world’s environmental condition is simply a reflection of man’s heart. And the only way I see us gaining the will is either by entering a crisis or developing a deep personal spirituality through continually searching everywhere possible for what will foster our development and help us become more and more spiritually oriented and ultimately spiritually dominated beings. The manifestation at the world level when its peoples evolve spiritually will be a unification of mankind, a deep love and reverence of nature, and a harmony of mankind with it. This is why I began the Spiritual World of Nature Series at the Schlitz Audubon Nature Center.

Why do this at a nature center, especially when we expect it will be controversial to some people? I have three major reasons. First, the presentations include how nature promotes spirituality for the speaker. If a faith tradition is presented, how does that tradition value nature? So these two organically connected entities inevitably reinforce the value of each other. Second, as I have said, a lack of spirituality is the root of the environmental crisis. I base this on the fact that we know we are constantly degrading the environment and we know what we need to do to stop. We are missing the motivation, and motivation is strictly spiritual in nature. And third, all people, in my opinion and probably in most people’s opinion, need and benefit from spiritual development. More and more people in these troubling times are becoming aware of this and crave it.

The Baha’i Faith believes that religion is and always has been God’s instruction for well-being, and is given to mankind in every age. I use the word religion in the singular because the Baha’i Faith teaches that the world’s major religions really are one, all having one source, the One Creator. The social teachings are timely formulas for applying the universal and eternal spiritual principles to the age they are revealed in, and so they vary. The Baha’i Faith contains a multitude of teachings about mankind’s need to protect the earth and its life-sustaining systems because it was revealed in the age when this relationship is critically out of balance. This is the age when the light of God is shed both on the global unity of religion and the need for a global unity of mankind in order to solve its problems.