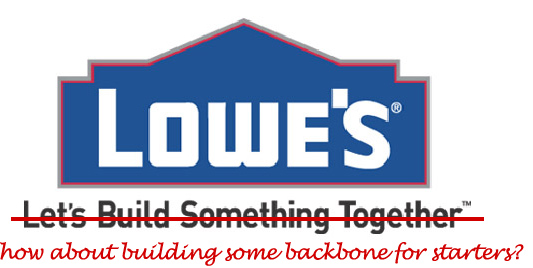 When asked by a Fox News correspondent about scenes advancing “Islamic fundamentalism,” David Caton, Executive Director of the FFA said, “It’s the absence of the radical side of the proposition of Shariah Law that is most concerning.” By Caton’s logic, peaceful, patriotic Muslim-Americans are a minority. He believes violence and hate to be the norm among Muslims everywhere and sees the spreading of Islam as a threat to all of humanity.

There’s nothing subtle about Caton and the FFA’s hateful ignorance and bigotry towards Islam and Muslims, but Lowe’s is slightly more nuanced in its defense of what are fundamentally shameful, discriminatory practices. Lowe’s Vice President Chris Ahearn said, “Our decision was not political, it was not social in any way. We just knew that it was a controversial program, and we wanted to reach consumers, and a controversial program is not a great place to do that.”Apparently, a reality show about a police officer, football coach, and newlyweds is controversial or a “lightening rod” as top executives have said.

Stewart points out that Lowe’s still advertises on TLC, during programs such as Toddlers and Tiaras, an incredibly controversial program that features little girls competing in beauty pageants. Some parents on the program have even outfitted their scantily clad four-year-old daughters with breast padding in order to more aggressively compete for the pageant prize. So apparently Lowe’s is more comfortable with shows that border on pedophilia and send inappropriate messages about sex to children by nearly anyone’s standards, than they are with advertising during a relatively boring reality television show following the lives of Muslim-Americans in Michigan.

Fortunately, the behavior of Lowe’s and other corporations who have reportedly pulled their advertising from All-American Muslim has been noticed and criticized by the media all around the world. And the most likely outcome, not unlike what followed other hateful initiatives led by the FFA, is that even more Americans will realize the absurdity and disgusting nature of Islamophobia. Lowe’s will lose money, TLC will profit, and an attempt to invoke fear will end up serving as an educational tool for millions of people.

Can large-scale discrimination actually lead to a countering of inequality and hatred, since these very public acts highlight the discrepancy between the ideals and actions of Americans? Will businesses become more cognizant of their portrayals of Islam and Muslims following the latest events? Will the Lowe’s controversy signify the peak of intolerance towards Muslims, or will Islamophobia continue to gain steam?

2 thoughts on “Will Discrimination Backfire?”