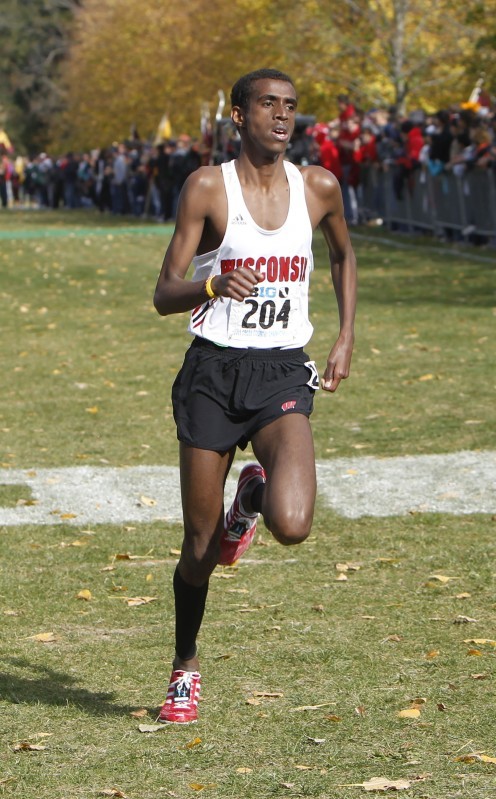 Last month, Mohammed Ahmed led the University of Wisconsin-Madison cross country team to its 5th NCAA championship title. The top finisher on his team, and placing 5th overall, the 20-year-old junior ran 10 kilometers in just over 29 minutes; that’s a 4:40 mile! Given Ahmed’s times, I assumed that he had been running since early childhood. Apparently not. I recently got the chance to speak with Ahmed about his love for running, how his faith in Islam informs his attitude about success, and his experiences as a Somalian immigrant growing up in Canada.

Born in Mogadishu, Somalia, and raised in a few East African countries until he was ten, Ahmed moved to Niagara Falls at 11 years of age.

I didn’t really consider running as a sport while I lived in East Africa. Kenyans and Ethiopians compete at the international level as the world’s best runners, but most people get a great deal of exercise in their daily lives from walking throughout their day. It’s mostly in the west where people intentionally exercise.

A couple of years after Ahmed arrived in Canada, he began to gain interest in competitive running and started to join running clubs. By tenth grade, he was one of the top cross country runners in all of Ontario, and his sights were set on taking it to the next level. Ahmed was recruited by universities throughout North America and eventually accepted a full scholarship from UW-Madison. And it turned out to be a good choice. Ahmed and the Badgers’ national title wasn’t the first success, having taken third place last year, and continually dominating the Big Ten Conference.

I asked Ahmed if and how his strong faith in Islam have influenced his perspective on success (Ahmed was chosen as an All-American for the third year in a row). Reflecting his reputation on the team and within the Muslim community, Ahmed spoke of his accomplishments with genuine humility. He told me that regardless of how he does in competitions, he feels fortunate for the gifts that he’s been provided by God, and is grateful that Islam keeps him centered.

If I did not have Islam in my life, I truly believe I would not be the same person I am today. I would be following my desires way too much and I think my running would suffer as a consequence. … I would be womanizing and partying…and other things that college students and people of my age are doing. … All I focus on is my school and my running, which is balanced by my religion.

A practicing Muslim who regularly goes to the campus Islamic center to pray or simply socialize with other Muslims, Ahmed takes his faith seriously, and sees it as one of a few important aspects of who he is.

My faith is another part of who I am, just as being a runner, a brother, a son, and other things are a part of my identity. … When I was a kid, I went to Islamic school for a few years and was studying the Qur’an, but I lost a lot of it since I left East Africa. … Eventually, I want to go back to studying Islam and I’d really like to become hafiz.”

Hafiz means that one has memorized the Qur’an by heart. It’s a tradition in the family, and Ahmed told me that many of his relatives back in East Africa have formally studied Islam at some of the top religious institutions in the world.

Ahmed plans to visit his family in Northern Somalia this winter, the first time in over 12 years he will have been to East Africa, a region of the world known for star runners but to which he returns as an athlete trained abroad. However, as Ahmed told me, he’s a brother, a son, and a cousin as well. His faith and interests are aspects of his personality, but it is the relationships that he has with family and friends that really make Mohammed Ahmed who he is.

Does the media focus too much on the belief systems of star athletes? Or do they not make enough of it? Can an individual’s faith assist them with their own athletic performance?