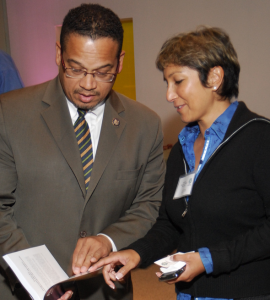 Zonneveld told me that the rationale for this initiative stems from increasing radicalization of North American Muslim youth of Somali origin, primarily concentrated in Toronto and Minneapolis, where some leaders have been ridiculed from within their own community for confronting the issue of  charismatic extremists radicalizing youth through the internet.

[With the] Somali effort, it is education and politics… It’s education in the sense that if you are raised in a community that is intolerant of the other, when you are engrained in that theology, there is a thin line between that and radicalization.

Zonneveld and MPV wanted to support these outspoken leaders in an effort to educate youth about the principles of Islam and the Prophet’s emphasis on living a balanced life. That’s when Literary Zikr emerged.

[T]he education of Muslims is imperative because it forces a way for a progressive interpretation of Islam to exist… This is a [Somali] community that is Orthodox, and there are a couple of individuals that are fighting back… It’s important to support people within the community that are working to counter this.

The project has currently published two topics on its website–shariah and sexuality–and will introduce a few more in the coming months–governance, pluralism, and women’s rights. The Q&A format is written at a level accessible to younger readers, as well as those for whom English is a second language. Zonneveld explains why this accessibility is important.

The [Islamic] scholarship writing is brilliant, but inaccessible to the masses… If there’s anything I learned from the Tea Party movement, it’s dumbing things down… Making it applicable and palatable to people in the 21st century… We use the writings of the scholars to support what MPV does.

I also asked Zonneveld how Literary Zikr reflects the overall vision of MPV.

[We’re] offering an alternative way of interpreting Islam [that includes] gender equality and the acceptance of the LGBTQ community… We need to create a community that is accepting of all issues… Islam is accepting of differences, because we were made different [but] there needs to be spiritual equality… We have to reeducate our interpretation of Islam.

But not everyone agrees with the group’s approach. I’ve written about opposition to MPV and its mission in past posts. While some disagree with the reinterpretations of Islamic scholarly work highlighted and supported by MPV, others contend that it is their “confrontational” approach that turns them off. Some even question using the word “progressive” in the organization’s title and believe Islam to already be progressive, given its emphasis on social justice issues.

Regardless of where one stands on issues of Islamic reinterpretation, gender, sexuality, or other hot button issues, it’s clear that Literary Zikr and other MPV initiatives are creating discussion within Muslim communities. And Zonneveld seems comfortable and poised to accept any of the challenges that MPV has faced from Muslims or others.

We have always had a tradition in Islam, a critical and analytical analysis of the sacred text. For people to say that this is un-Islamic … That’s fine, you can practice your Orthodox Islam.

Why do you think some people within Somali communities have disagreed with their own community leaders speaking out against Somali extremist indoctrination? How do you feel about Islamic scholars reinterpreting Islam for a contemporary time period? Do you think MPV’s efforts are productive in creating dialogue around sensitive issues within Muslim communities?