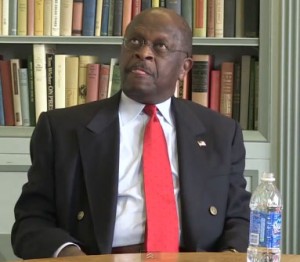 Last week, Republican presidential contender Herman Cain badly stumbled at an editorial meeting in Milwaukee, Wisconsin, displaying his limited knowledge of the current situation in Libya. His campaign blamed the gaffe on 4 hours of sleep and an ambiguous question from reporters. A few days later, Cain asked the media in a rhetorical manner, “Do I agree with saying that Gadhafi should go, do I agree that they now have a country where you’ve got Taliban and Al Qaeda that’s going to be a part of the government?” For the record, the Taliban has never been associated with Gadhafi or Libya.

Americans, whether politicians or citizens, have a negative reputation worldwide when it comes to knowledge of global affairs, and Cain didn’t help to break that perception. Unfortunately, despite America’s diversity and a history of immigrants continually reinventing the country’s identity, many Americans and their leaders remain woefully ignorant of the complexities of the world. And in light of the wave of Islamophobia and hatred towards Muslims especially over the last decade, one would have hoped for a more rigorous discussion about the various types of Muslims and Islamic ideologies that exist.

Cain’s comments about Libya and his attempt to (incorrectly) reference some of its more conservative Islamic groups, reminded me of an important distinction that Reza Aslan spoke of during a past Inside Islam radio show, Losing the War on Terror (19:33 onwards),

We have lumped together all of these disparate groups and organizations from … Hamas and Hezbollah to Al Qaeda and the Taliban to Iran and the Muslim Brotherhood into a single category as though they all want the same things and they have the same ideology, and they certainly do not. Groups like Hamas and Hezbollah and the vast majority of the Taliban–probably some 90% of the Taliban–are nationalists; they’re Islamists as we refer to it. Islamism is a political philosophy that seeks to create a nation-state. … The thing about these kinds of nationalists is that they want something concrete. Even if what they want is unacceptable to us, it’s still a starting point, it’s still a place where you can actually have a discussion and some sort of negotiation. The opposite end of Islamism is what I refer to [as] jihadism, which is stateless, it has no national ambitions whatsoever, in fact it wants to get rid of all nation-states. It wants to reconstitute the globe as a single world order; it’s utopian in that regard…and Islamists want something concrete and jihadists wants nothing concrete.

No one has to be a professor or Islamic scholar to understand what Aslan is talking about. It’s time for American politicians, citizens, and the media to end the excuses and the monolithic references related to Islam and Muslims across the globe.

Why have Americans of all backgrounds continued to openly display and accept such a high level of ignorance towards Muslims and Islam? Is it the responsibility of Muslim communities within the United States to educate non-Muslim Americans about the differences between Islamic political groups and movements? What ways can we interject greater nuance into the public debate?

One thought on “The Taliban in Libya?”