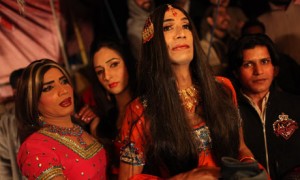 Hijras have a unique and somewhat tragic history in South Asia: they are males who a) were born with intersex or deformed genitilia, b) were castrated when young or c) perceive of themselves as women despite having male organs. One must not confuse a hijra with transgenders in the West as the concept has a completely different connotation in South Asia. Most hijras do not voluntary undergo sex change and are often abandoned as children by their biological parents out of shame. We know that they have existed in the subcontinent since at least as early as the Mughal regime in the 16th century. In the Middle East, they were often employed by the Ottoman Sultans to administer the harems and police the Islamic holy sites in Mecca and Medina.

Despite centuries of existence in the subcontinent though, their social conditions have not improved. They are still subject to routine discrimination at every level of not only Pakistani, but much of South Asian society. The community is ostracized, forced to live in segregated, isolated ghettos and reduced to begging, prostitution, and culturally detested forms of entertainment to earn a living. In fact the word “hijra” is used in South Asia as a derogatory slur intended to cause serious offense. This lack of understanding has bred not only discrimination but fear: a popular myth is that a hijra must never be refused money when they show up begging at your door because as a ‘disabled’ person, they can put a horrible curse on you. Rather sadly, this vicious cycle of ignorance has continued unchecked.

Fortunately however, the Pakistani Supreme Court has been instigating a subtle but important human rights revolution for hijras over the past couple of years: at different times, it has ordered the police to stop harassing them and directed the government to ensure that they are granted their constitutional rights of life and dignity.

This latest decision of the court, recognizing for hijras a third gender on government-issued identity documents, provides them with a cultural legitimacy and dignity that is necessary for them to be able to increase their social and economic status in society. Such symbolic identity could, in the long term, translate not only into financial and social gain for them, but for society generally, through a process of de-stigmatization that encourages them to engage in more productive forms of economic activity.

Another positive aspect of the decision is that it signals that a more promising route to developing progressive human rights norms in Pakistan may be through strengthening the judiciary and other civil institutions rather than forcing change from outside. We should not forget that the decision also helps craft a much needed positive international narrative of Pakistan as a society much more capable of change from within than is usually assumed. I was actually quite surprised that the decision has not been reported with any great fervor in the foreign media, but then again, this story may not attract as many clicks as the Osama Bin Laden story even though this development may actually end up making a much more substantive long term impact in the country.

Of course much more can and needs to be done for the promotion of civil rights in Pakistan and the Muslim world. While we cannot expect that the decision of the Pakistani court will bring about an overnight change in terms of social perceptions or that every decision will be a progressive one, each and every incremental step that forces the court to answer difficult questions about human rights nudges us in the right direction in forging a more humane and tolerant society – even an adverse decision, while depressing, is still publicity.

Following the recent Pakistani Supreme Court ruling acknowledging a third gender on government-issued ID Cards, no protests opposing the legal decision was reported. What, if anything, does this say about Pakistani society? Is this is an example of cultural traditions trumping the mainstream perceptions of gender among the majority of Muslims worldwide?