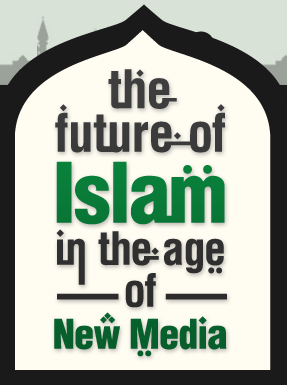 His new project, The Future of Islam in the Age of New Media, highlights the perspectives of 60 academics, scholars, and bloggers on how access to new media has shaped Islam and Muslims around the world. While most contributors see the internet as a “democratizing force,” some warn of the dangers that arise with equal access and speak about the potential hazards of providing a platform for anyone and everyone to offer their voice.

The wealth of material available on the site includes downloadable commentary from 60 diverse speakers, offering their opinions on new media and Islam in under 60 seconds each, and you can read or listen to my own thoughts as well (1:02:39). Videos with scholars and a report on internet censorship in majority Muslim countries are also available.

One of the more thought-provoking perspectives came from Haroon Moghul, Associate Editor of Religion Dispatches and a current Fellow at the Institute for Social Policy and Understanding.

There are a lot of voices that are authoritarian and believe themselves to be authoritative. But we have a huge gap between people who see themselves as primarily engaged in what they call modern world and we have people who primarily identify through a religious lens. And in the absence of institutions that can produce people who can navigate both those streams, and I know there is lot of both of them and a lot of overlap… the danger…with the internet…is the possibility of magnifying some of these negative tendencies and encouraging people to stay within their own points of view.

You can listen to more of Moghul’s statement here: [audio:https://insideislam.webhosting.cals.wisc.edu/audio/dStory/H_Moghul_NewMedia_Islam.mp3]

Reza Aslan said that while the internet has democratized, it has also “fractured the Muslim community into ever competing schisms and sects.” Aslan believes that, looking forward, we’re going to find an even more eclectic Islam, and he says that’s a good thing.

Sam Rosen, the co-founder of ThoughtLead, spoke of the importance of religious leaders’ balancing technology and tradition:

It works on two levels…Islamic leaders who want to bring a more progressive vision into the world need to be able to…be fast with the latest tools and technologies and…need to be speaking about what [they’re] doing in a way that embraces a modern version of Islam while retaining the best of what Islam has traditionally offered to many spiritual seekers throughout history.

[The] problem is that social platforms [new media] are not really suited to have a kind of in-depth analysis and conversation to answer the question that scholars in the old age [asked but] didn’t succeed in providing an answer that will help the Muslim Ummah to answer its existential questions.

One point that was not covered by many speakers relates to accessibility. While many more Muslims can access more information through online archives such as those from the Al Azhar University library, the overwhelming majority do not. Furthermore, many choose not to engage with new media, others do not have access to the internet in the first place, and for those that do, it can be difficult, and at times even dangerous for lay people to interpret religious texts. So this begs the question of who has access to new media and why that might matter.

Moghul sees new media as reinforcing people to stay within their own point of view; Aslan sees eclecticism as a good thing; and ben Gharbia doesn’t think new media is the correct forum for what is a necessarily in-depth analysis of important questions. How do you think new media is affecting Islam and Muslims worldwide? Is it possible that the decentralized nature of the internet matches the history of increasingly decentralized Islamic leadership? Please share your thoughts below.