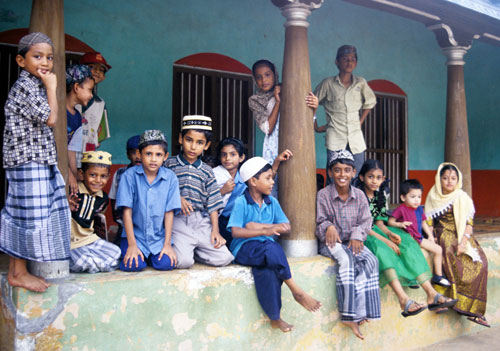 A few days prior to my departure from India in August, I ventured south from Hyderabad to the old French colony of Puducherry (Pondicherry), situated on the Bay of Bengal. I had a few minutes before my overnight bus journey back to Hyderabad and I decided to take a quick tour around the neighborhood to get a flavor of the area. Upon turning the corner of an old Hindu temple and noticing posters of Hindu gods transitioning to signs in Urdu and other objects marking the Muslim section of the neighborhood, I came across a typical 3-story white and green mosque.

It was time for dhuhr prayer as the sun was high, and many local Muslims were continuously flowing in and out of the mosque. But something was drastically different. I was immediately struck by the fact that both men and women were entering and exiting the mosque. In Tamil Nadu, like most other places in India, temples, mosques, gurdwaras, and churches can provide insight into local cultural patterns, often reflecting the mores of the area.

Any generalization about cultural and religious patterns in South Asia is dubious at best, but it is safe to say that in the overwhelming majority of small, local South Asian mosques, women do not attend. Aside from prepubescent girls accompanying their fathers, uncles, cousins, and grandfathers, most mosques do not even have a dedicated prayer space for women, with some refusing female entry at all times.

South Asia stands out compared to other world regions in terms of women’s agency, which is much more nuanced than the overarching assessment of “gender oppression” often posited by first-time visitors from the west. Yet three of the top four worst places for women in the world are there (Afghanistan, Pakistan, and India). Many South Asian Muslims, accustomed to strict gender norms, actually believe that certain cultural practices related to gender are religious in origin. Similar beliefs around women in the public space can be seen to varying degrees within most religious communities within India.

Despite the gender discrimination that dominates much of South Asia, the Puducherry mosque did not reflect the “standard” South Asian mosque etiquette that precludes women from praying in a public space. Since Puducherry lies within Tamil Nadu, one of the more educated, economically stable, and socially progressive states in India, I shouldn’t have been surprised that this Tamil mosque operates differently from that of most others in South Asia. I saw little boys and girls sitting next to each other, learning the Qur’an together—a distinctly unfamiliar site in South Asia. Aside from entering the men’s prayer area, women moved freely within the mosque, and seemed to carry themselves with the same degree of comfort and confidence as any other public space.

The list of historical examples of gender equity within Islam is long and can be best traced back to the life and time of the Prophet Muhammad. The Prophet’s first wife, Khadijah, was a successful businesswoman, many women owned property, and both sexes prayed together in congregation. Good or bad, it is the cultural norms of areas where Muslims live that have shaped much of how Islam manifests itself around the world. And so even in conservative South Asia, there are pockets where the Islamic principle of gender equity is reinforced by the cultural norms of the area.

Have you ever experienced men refusing women access to a mosque in South Asia? Is there a “culture of Islam,” and if so, what is that culture? Can a religion ever have “culture” or are the norms that come out of religions simply “religious behaviors?”

One thought on “Mixing in Mosques: An Influence of Neighborhood Norms”