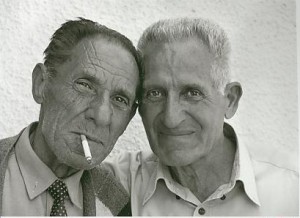 Last week, I wrote about how majority-Muslim Albania saved thousands of Jews during the Holocaust. Recently, I was lucky enough to speak with Norman Gershman, the renowned American photographer of Jewish descent who traveled over a five-year period documenting the stories of Jews, and the Muslim-Albanian families who saved them. You can listen to my conversation with Gershman below.

Click on the player to hear my interview with Norman Gershman: [audio:https://insideislam.webhosting.cals.wisc.edu/audio/dStory/NormanGershman_InsideIslam.mp3]

I was struck by the similarities between Gershman’s description of besa and pashtunwali, the code of honor among pashtuns— the majority ethnic group in Afghanistan and the largest minority in Pakistan. Nearly 100% Muslim, pathans (also known as pukhtuns), like Muslim-Albanians, view the Qur’an and pashtunwali as foundational to their beliefs and cultural practices, perfectly complementing one another.

During my travels to Albania and Pakistan throughout the 2000s, I experienced besa and pashtunwali firsthand. The degree of hospitality and safety that I felt while traveling around the more rugged parts of both countries was unmatched by any other place I have seen or heard of. While backpacking in Pakistani-controlled Kashmir, even non-pathan families influenced by pashtunwali offered me their homes to stay in and filled my hungry belly with home-cooked food. Albania, with terrain like Pakistan’s, offered a similar experience, with food, shelter, and protection provided to me by complete strangers off the street.

My cousin and I stayed with a local Muslim-Albanian family while traveling through Macedonia in 2004.

So when I consider my own experiences and reflect upon Gershman’s photographs of Muslim-Albanians and the deeds that they carried out to save the lives of Jews during the Holocaust, I’m anything but surprised. If I was taken care of as a wealthy, healthy tourist throughout my tours of Albania, there is little reason why Jews, or anyone in danger, would not be sheltered and cared for under besa. My travels in Pakistan only reaffirm the reinforcing relationship between Islam and cultural codes of honor, whether in Europe, Asia, or any other place. Gershman’s photography serves as a reminder of the acts of kindness that were exhibited in the past and continue on today.

My portraits of these people, and their stories, are meant to reflect their humanity, their dignity, their religious and moral convictions, and their quiet courage.

Have you ever experienced besa, pashtunwali, or a similar cultural code of honor that is supported by Islam or other faith traditions? Why are the Islamic complements of besa and pashtunwali rarely, if ever discussed in the media? Can culture be separated from faith in either of these situations?

7 thoughts on “Islam, Besa, and Pashtunwali: A Seamless Integration”