Linxia isn’t particularly known for tourism or anything. Most tourists who stop here (if they stop at all) are on their way to Labrang Monastery, one of the major monasteries for Yellow Hat Buddhism further down the road in Xiahe. Guidebooks in English and Chinese have very little information about Linxia, despite its long history as a center for Islamic activity in China. Much of the Muslim communities’ organization came via powerful Sufi orders (menhuan), and followers still make pilgrimages to the shrines of the masters today. As a tourist here, you have to ask around in order to find some of Linxia’s many hidden charms. I came in search of religious shrines (gongbei, from Arabic qubba“cupola”) of the Sufi masters that had a major impact on the region’s Islam and politics of late Qing Dynasty. Click here for the rest of this article and more pictures. 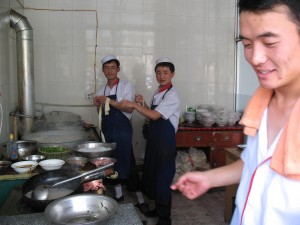 I had seen pictures of such tombs in Karl Luckert’s book entitled Mythology and Folklore of the Hui, A Muslim Chinese People, so I (kind of) knew what I was looking for. I caught a glimpse of something on the edge of town that looked like a gongbei, and I walked out to it. I got to the dusty old complex and walked through the doorway, after paying attention to the inscriptions on the doorway I realized that it was not a Sufi shrine at all, but a Buddhist shrine. After that I continued on to the next grand religious complex that I could see, and discovered this one was Daoist. I have since learned that old construction styles of prayer halls, temples, tombs, whether they be Muslim, Buddhist, or Daoist, are not particularly unique to the religion. For this region, people decorate worship centers with the same grey brick walls, with embossed carvings detailed with slightly different motifs. The buildings were built the same way, in the same shapes, too. Finally, after some neighborhood kids helped show me the way, I found my first gongbei. I could see it over the wall in the middle of the neighborhood, but it took me a while to find the entrance. 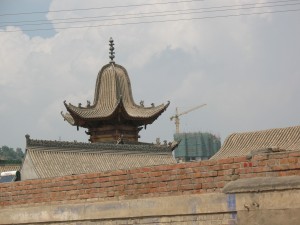 A Gongbei, as Seen From a Linxia Neighborhood Street Photo: David Dettmann

I imagined I was going to find some old structures there, probably at least as old as the run-down Buddhist shrine I had seen earlier. I was unprepared for what awaited me inside. After a dusty, noisy, narrow access, I could see an exquisite garden enclosed by brick walls that were intricately carved. I asked the policeman—who had just come back outside from praying inside the complex—if tourists could visit. He happily welcomed me in. The beauty of the place was stunning. The superb craftsmanship together with the garden was very calming. It was a nice change from the commotion of the busy street outside. There were two tombs inside, and I later learned that this gongbei was of the Qadiriyya sufi order, one of the most widespread sufi orders in Central Asia. Supposedly, this had been a Muslim site dating as far back as the origin of the town. The complex was called Yu Baba Gongbei (Gongbei of Father Elm), also known as “the old gongbei.” It was maintained remarkably well. Arabic and Chinese adorned the walls, along with many images of nature.

It was clear to me that the craftsmanship was recent. The complex had apparently been destroyed in 1928 during Ma Zhongying’s uprising (when the region was controlled by warlords), and again during the anti-religious fervor of the Cultural Revolution in the late 1960s. Only after Deng Xiaoping’s reforms and the enactment of new policies of tolerance towards Islam was the complex restored, between 1983 and 1990. It must have been a lot of hard work. I wandered around the complex a bit, appreciating the incredible carvings and tomb architecture. 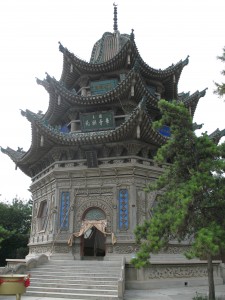 Linxia has several gongbei for various menhuan. Another important order sufi order in Linxia is the Naqshbandi Khufiyya order, in the form of the Huasi (“multicolored mosque”) menhuan (see photo right). Ma Laichi was a very influential leader and was very successful in converting the people of the region to Islam in the 18th century. He established the Huasi menhuan in China after he studied in Mecca and Yemen while on the hajj. His shrine in Linxia has also been destroyed and rebuilt several times, like the Yu Baba Gongbei. Still, Ma Laichi remains a revered figure today. In front of his shrine, there is a big cauldron where followers can burn incense in his honor.

When I arrived at this gongbei, I could hear several followers performing a vocal dhikr (remembrance of the prophet, in this case done in a rhythmic chant) happening inside the gongbei. To Chinese history, Ma Laichi’s followers played a role in the “Muslim Rebellion” from 1862-1873, when violence between competing Naqshbandi sufi orders (including the Khufiyya and Jahriyya) led to military intervention, and then anti-Muslim violence by the Qing and anti-Qing retaliation by Muslim militias. Regardless of the violent periods in the distant and recent (i.e. Cultural Revolution) past, the Huasi traditions are still going strong in Linxia. I appreciated the huge Huasi mosque and its gate as I walked back to the main road.

I finished my day in Linxia with a delicious bowl of lamb and noodles from a Santa (Mongol-speaking Muslim, Dongxiang in Chinese) restaurant. The boys there were great. They helped me learn a few phrases from their language, and let me take pictures of them making the noodles, which entailed tearing flat pieces of dough into the boiling water. It was a very fulfilling day. For my next trip to Linxia, I need a lot more time.