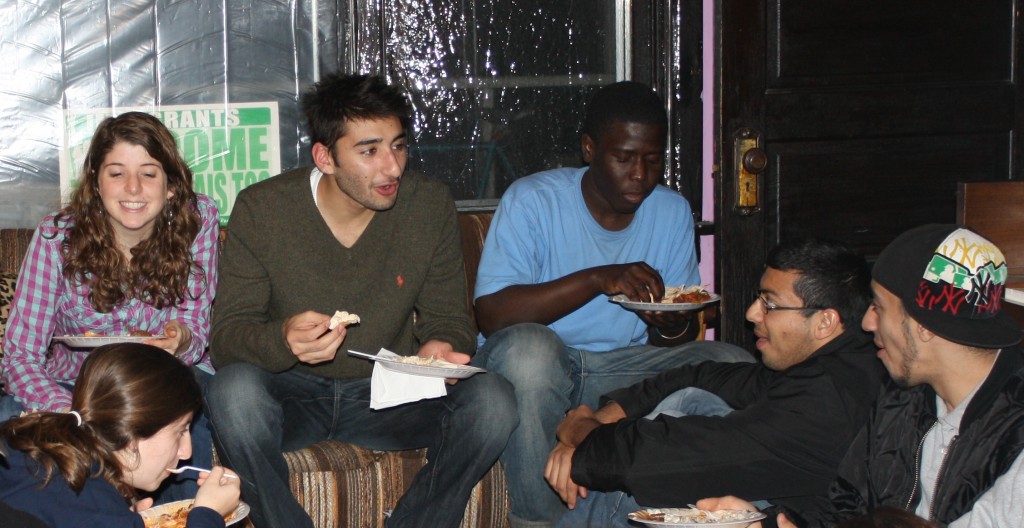 On college campuses where significant numbers of Muslims and Jews study, it may not be surprising to find that they have negative perceptions of one another. To characterize the overall dynamic between these two groups as tense is generally not accurate–there have been a number of service-based/interfaith dialogue initiatives between them–but the reality is that many students from both groups have been raised in environments that instil deep distrust for one another, sometimes bordering on hatred. And this is despite the fact that Muslims and Jews have shared more common experiences with each other living in a Christian-dominant US than with any other group.

Yes, many observant Muslims and Jews avoid eating pork products, and thus eat both halal and kosher food products, but the similarities run much deeper than what’s seen on the surface. Both Muslims and Jews have been living in the US as small minorities for centuries. The first Muslim came to what is now the US in the mid-16th century, and the first Jews arrived about a century later.

African slaves accounted for the first waves of Muslims living in the present-day US and the vast majority of Muslims were descendents of those slaves until significant numbers of South Asian and Arab Muslims began arriving in the mid-1960s. The first major immigration of Jews to North America occurred during the late 19th and early 20th centuries, however the first Synagogue was built in 1763 in Newport, Rhode Island. Conversely, the first mosque in the US was built much later, constructed by Albanian Muslims in Biddeford, Maine, in 1915, since slave owners prohibited the use of Arabic and practice of Islam throughout the slave trade.

Today, there are approximately 3 million Muslims and 5 million Jews living in the US and both Muslims and Jews continue to face significant discrimination. Hannah Rosenthal, President Obama’s Special Envoy to Monitor and Combat Anti-Semitism, recently cited a study indicating that “Muslims and Jews are more likely than adherents of any other tradition in the US to conceal their religious identity.”

Muslims and Jews still aren’t considered true “Americans” by mainstream society, despite the fact they are the two most successful religious groups in the country in terms of education and wealth. According to Gallup, the two most highly educated religious groups are Jews and Muslims, among whom 61% and 40% respectively have a college degree, compared with 29% of Americans overall. These facts carry across gender lines as well, with Muslim females being the second-most educated religious group in the country, after Jewish females. Both groups also have household incomes above the American average.

Both Muslims and Jews in the US come from diverse geographic and cultural backgrounds. Another Gallup study concluded American Muslims to be the most diverse group, and a Pew Research Center project found that 63% of American Muslims are first-generation immigrants. While the majority of American Jews live in the New York metropolitan area, nationwide they represent a broad cross-section of identities: Ashkenazi and Sephardic (geo-cultural identifications), Orthodox and Reformist (religious distinctions), and a noticeable minority of Jews who identify with little of the cultural and religious background of their ancestors. And not all American Jews live in the Northeastern corridor. For example, there is a sizable group of Persian Jews who live in Southern California.

Diversity, higher education, and financial success are a few of the most valued aspects of being American, but for some, being Muslim or Jewish excludes one from becoming “genuinely American.” It’s a shame that the purveyors of misinformation and rhetoric largely generated by the Arab-Israeli conflict have divided these two natural allies, preventing them from more forcefully combating hate and division together. But there are signs of hope and progress: government programs and non-profit initiatives are beginning to engage on these issues. Americans of all stripes seem to be slowly recognizing the foundational values of our society, regardless of race or cultural background. Most importantly, passionate Muslims and Jews are building strong bonds to unite in solidarity, and thus demonstrating what it is be that much more American, together.

If you are Muslim or Jewish, do you relate to the discrimination that the other group has faced? Do you find yourself sharing more common experiences with each other than with other groups? If you are neither Muslim nor Jewish, how do you feel about the characterizations of shared experience between American Muslims and Jews?

10 thoughts on “Muslims and Jews in America: The Most American of All?”