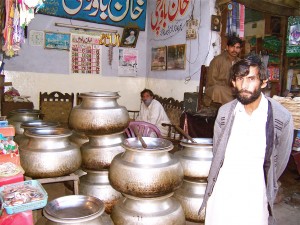 A food distribution shop in Lahore, Pakistan. Shops like these are common near Sufi shrines where impoverished citizens receive free meals through the donations of individuals. Photo: Colin Christopher

Mainstream media in the U.S. often focuses on stories of breakdown rather than success, especially when dealing with the world outside our borders. Nowhere is this more apparent than in media treatment of Pakistan, which may have one of the most lopsided ratios of negative to positive news stories of any country in the world. No one can deny the great challenges it faces, but what mainstream media stories about suicide bombings and natural disasters fail to capture is the strong charitable and philanthropic tradition of Pakistani society.

Pakistan has an incredibly vibrant civil society, with 200,000 people volunteering their skills full-time in 2004. Studies also show that individuals donate significant contributions to non-governmental organizations. The informal nature of Pakistan’s financial system is reflected in charity as well, thus many informal donations are not accounted for in the data. South Asian cultural values of responsibility for family and community may also account for a high number of donations to individuals. Finally, other factors such as anonymity also explain why most estimations underpredict the total amount of donations given by Pakistanis each year.

In Islam, as in many other faith traditions, believers are encouraged to value the judgment of God above all and to shy away from public recognition. Generosity and a strong sense of community play a role in this country’s philanthropic tradition, but there are also Islamic principles influencing the charitable decisions made by Pakistanis, 96% of whom are Muslim.

Zakat, the fourth of the five pillars of Islam, requires Muslims to donate a certain percentage of their savings to a charity of their choice. The rule only applies to individuals/families with savings greater than 2.5% of their annual income after all lawful expenses have been met, and only funds that have been saved for a year or longer are counted. Furthermore, there is a total earnings threshold that is also factored in, thus exempting individuals/families earning small amounts of annual income from the donation requirement. Zakat contributions can be made throughout the course of the Islamic calendar year, and the more one gives, the greater the benefit for the giver and the receiver, assuming the donor’s family is appropriately taken care of first.

Two verses from the Qur’an highlight the importance of charity and generosity in general:

Those who spend in charity, whether in prosperity or adversity, who restrain anger and pardon people; for God loves those who do, [and are] good to others [3:134]

Who has created the heavens and the earth and sends down rain for you from the sky? With it We caused to grow orchards full of loveliness; it is not in your power to make trees grow in them [27:60]

In Islam, the Real Owner, Creator, and Destroyer of all material goods on earth is God. Thus, when a Muslim or any human being provides charity to another, it is not seen as a private donation, but as a transfer or just redistribution that pleases God. The phrase Bismillah ir-Rahman ir-Rahim, “In the name of God, most Gracious, most Compassionate,” is the most commonly spoken Islamic phrase, and zakat is seen as one of the highest human manifestations of God’s desire to nourish and redistribute resources more equitably.

Even though the overwhelming majority of Pakistanis live at or below the poverty line, generosity is the norm, and it is not uncommon to see a poor person sharing common resources with someone of a higher economic status. So regardless of whether or not the mainstream media reports it, Pakistan will continue to be a country of generosity.

How do you view charity? If the Islamic pillar of zakat is the motivation behind a philanthropic gesture, does that take away from one’s positive intentions? Do you think zakat is a good way to bring about a more equitable wealth redistribution?