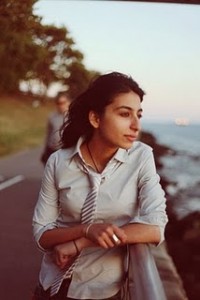 Significant parts of Pakistan’s governance and security structure may be crumbling before our very eyes, but the country’s musical arts are anything but dead. Those lucky enough to have been exposed to the creative energy of Pakistani musicians know of the contributions from Nusrat Fateh Ali Khan, Farida Khanum, and others. Now, even those outside of South Asia and the world music scene are being exposed to the sounds of the region. Often combined with western influences, and deriving from Sufi traditions, musicians and music from Pakistan are growing in popularity inside and outside South Asia.

Lahore-born, New York-based Arooj Aftab is making waves in the underground music scene with her Sufi-inspired vocals and is seen by many as one of the next big world fusion musicians. Currently touring small venues and cultural festivals raising awareness about social issues in the U.S. and Pakistan, Aftab is building a base of loyal fans. She attracts listeners through her band’s instrumental diversity and their experimental approach to each song. Aftab’s unassuming, surprisingly powerful voice sets her apart from what traditionally has been Pakistani Sufi singers with a more apparent booming sound. Although Aftab’s music doesn’t specifically emphasize the Islamic influence on her music, much of the Urdu poetry that she uses has Sufi roots, and speaks of the love for God and the world’s beauty.

Other recent contributions from Pakistani-born musicians have made their way to the western charts, offering listeners a very different sound from Aftab’s. Sachal Studios Orchestra has recently released a jazz album that has grabbed international attention. Although the Sachal Studios Orchestra and some of Aftab’s songs both utilize the tabla (a Hindustani percussion instrument developed by the 13th century Indian Sufi poet, Amir Khusrau), the tempo and mood of the orchestra offer a bigger sound and may be characterized as more traditional world fusion.

Sparked by the personal musical interest of the wealthy London-based Pakistani philanthropist Izzat Majeed, the Sachal Studios Orchestra formed after Sachal Studios opened its doors in Lahore a few years back. The all-Pakistani orchestra, made up of professional musicians and other local Lahoris who renounced their street vendor jobs to revisit their love for classical South Asian musical instruments, recorded in the Sachal Studios before the music was mixed in an Abbey Road studio in London.

The 61-year-old Majeed was initially drawn to the arts as a child, growing up around his filmmaker father who produced music for Lollywood films. His love for American jazz and his memories of Dave Brubeck, Duke Ellington, and other music legends performing in Pakistan in the 1950s inspired his creation of Sachal Studios and his interest in producing an album that fuses jazz with the classical sounds of the subcontinent. Like many South Asian art forms, Lahore’s classical music traditions are passed down informally through the generations, with few institutions formally preserving instruments and knowledge. Music will continue to live on the streets and in the homes of musical families, but Sachal Studios now serves as a backstop for these great traditions. Majeed has even collected both western and South Asian instruments from around the area to ensure that a healthy supply remain readily available.

Pakistan may no longer be a destination for some of the world’s top musical artists, but it continues to generate and export talent that moves well beyond the region. Aftab, Majeed, and the Sachal Studios Orchestra are just a few of the South Asian Muslim musicians and promoters who’s artistic contributions are reaching listeners around the world. You no longer have to go to the old havelis of Lahore to be inspired.

Have you listened to Arooj Aftab or the Sachal Studios Orchestra? What is the significance of the fusion between western and South Asian classical music? Knowing that Aftab’s style is significantly influenced by Muslim Sufi poetry, will a western audience perceive her music any differently? Please share your comments below.