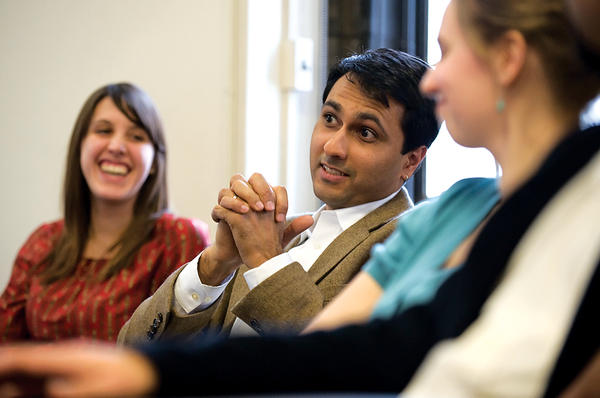 On   October 19, Here on Earth Host Jean Feraca will speak with Eboo Patel, founder of Interfaith Youth Core (IFYC), to discuss the latest IFYC success in promoting dialogue and strengthening communities through service.

Building on his previous experience with interfaith service projects in South Africa, India, and Sri Lanka, Eboo Patel started Interfaith Youth Core (IFYC) in 2002 from the humble settings of a Chicago basement. In just under a decade, Patel’s vision to build religious pluralism has created interfaith dialogue and service projects on all six continents and IFYC has hosted delegations and trainings from 16 countries.

Conferences, trainings, and dialogue are important to IFYC, but the primary purpose of Patel and the other 30 full-time IFYC staff is to build leadership within all faith communities. Patel notes that while 99% the world “inclines towards tolerance and cooperation,” a large portion of the remaining 1% are strong leaders and successful in their pursuit to discriminate and divide. Patel believes that if a larger portion of that 99% become leaders in their own communities, a better, stronger world will emerge.

Patel, an Indian-born practicing Muslim raised in the suburbs of Chicago, utilizes the unique combination of his charisma, intellect, and passion for social justice to express his Islamic faith. He often speaks of his personal spiritual journey and connects his own story to the experiences of others, building a feeling of inclusiveness among those around him. In many ways, his approach is steeped in the successful principles of community organizing promoted by another renowned Chicagoan, Saul Alinsky (a 20th century organizer and son of Russian-Jewish immigrants).

Patel believes religious pluralism to be the social justice issue of the 21st century, the equivalent of race issues during the 20th century. And he’s not alone. President Obama appointed Patel to his 25-member faith advisory council, and the work of IFYC has significantly influenced Obama’s “President’s Interfaith and Community Service Campus Challenge.”

Interfaith Youth Core uses “core” not “corps,” highlighting the organization’s standing as part of a much larger movement. My Fellow American, Week of Dialogue, and other efforts to promote interfaith dialogue and education have sprung up recently, and have emulated much of IFYC’s social media savvy in promoting their own initiatives.

Patel’s vision and the work of IFYC have also inspired other groups around the US to utilize service projects as the primary vehicle to strengthen communities through building interfaith leaders. For example, efforts are underway in Detroit to desegregate various racial/ethnic/religious communities through shared community service in Delhi, India. Founder Zehra Imam, a Muslim-American born in Karachi, Pakistan, raised most of her life in Detroit, has cited Patel as one of a few important influences on her own work. A past participant in an interfaith leadership development program including Christians and Muslims in the slums of Karachi, Imam now works as a Community Organizing Resident in Chicago as part of an interfaith program through Jewish Funds for Justice.

Young leaders of all faith backgrounds have become increasingly active in promoting religious tolerance around the world, and many dream of a day when the goal is not tolerance, but acceptance. Patel and other Muslims around the world are inspiring the next generation of leaders to take that next step to build more knowledgeable and healthy communities through service.

One thought on “Eboo Patel: One Muslim’s Vision for Interfaith Dialogue and Service”