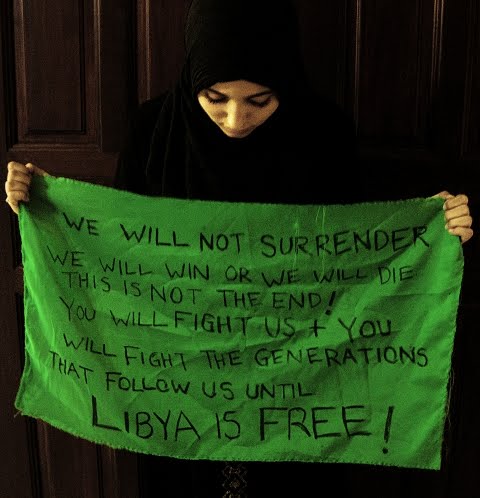 Various iconic photos of the 20th and 21st century have sparked inspiration, reflection, and at times, even outrage; the Afghan girl in National Geographic, the crying Vietnamese children, and the vulture staring at a starving child in Sudan.

A number of images have received a great deal of attention during the Arab Spring, but one sticks out for its powerfully emotional evocation: Zehra Tajouri’s photo of her sister’s humble and defiant pose is one for the history books. The photo, taken and posted on Tajouri’s blog on February 16—the first day of the revolution—received immediate attention inside and outside of Libya.

Tajouri, the daughter of a prominent Libyan family that defected from the Gadhafi regime years ago, carefully thought out her act of defiance.

“I wanted to deface the Gadhafi flag…I wanted people to see that it wasn’t a flag — it was a useless piece of cloth and should be treated as such. I wanted people to know that this flag didn’t represent me or anything I respected…I wanted to erase any meaning this flag held before. I even chose to write the message with a broken eyeliner pencil because in my eyes, it didn’t deserve to look neat…I wanted people to look it at and see how that the flag itself is ugly, but how the words on it were beautiful.”

The message she chose goes back to the early 20th century and the Libyan resistance movement opposing Italian colonization and occupation. The quote is credited to the great Libyan tribal bedouin leader, Omar Al-Mukhtar:

WE WILL NOT SURRENDER
WE WILL WIN OR WE WILL DIE
THIS IS NOT THE END!
YOU WILL FIGHT US + YOU
WILL FIGHT THE GENERATIONS
THAT FOLLOW US UNTIL
LIBYA IS FREE!

Muammar Gadhafi may still be hiding in Libya, but there is no doubt that most Libyans feel a sense of relief since opposition forces took control of Tripoli in late August. Revolutionaries are only steps away from realizing a major milestone in the history of Libya. We’ll never know how many saw Tajouri’s photo, but it will forever remain in the hearts and minds of those who fought for their freedom.

Do you recall seeing this photo last winter? Why do you think single images have the potential to influence millions of people? What is the significance of Tajouri and her sister being revered as important influences on the revolution? Please share your comments below.