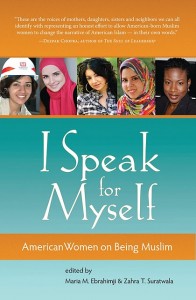 This Thursday, May 5th, Inside Islam hosts I Speak for Myself: American Women on Being Muslim on the UW-Madison campus. As part of a national book tour, co-editor Zahra Suratwala and contributors Amany Ezeldin, Mariam Sobh, and Zainab Alwan will speak about their experiences growing up in American society, as women of color and as Muslims. The talk will highlight the daily challenges that many women face in both public and private spheres. Human rights, Islamic fashion, and faith will also be discussed, followed by a Q&A and book signing. Amany Ezeldin will also participate in an Inside Islam radio show in Madison before the talk.

Free and open to the public.

The following is by the book’s co-editor Zahra T. Suratwala, founding editor of her own Chicago-based writing firm, Zahra Ink.

Four years ago, the editors of this book (myself, Zahra Suratwala,  and Maria Ebrahimji, executive editorial producer at CNN in Atlanta) perceived that if American Muslim voices were being heard, it was often in response to negativity.  And that as a result, conversations about American Muslims seemed to either be debates or defenses.  There were stereotypes to contend with, there were labels flying around.  What about simply hearing what Muslims had to say?  What about their stories?  We decided it was time to let 40 articulate, brilliant American Muslim women speak for themselves.

And in speaking for themselves, in showcasing their diversity by simply being themselves, they artfully defy every stereotype.  They eradicate the labels.

The book has been recognized by Deepak Chopra, Her Majesty Queen Noor, Nobel Peace Prize winner Muhammad Yunus, Soledad O’Brien and many others.  It has received positive reviews from Publishers Weekly, the Christian Science Monitor, countless blogs and online newspapers and magazines.  Clearly, this is more than just a collection of stories.  It is an invitation to all to read the book, to open their minds, to meet incredible people, to broaden their ideas of what Islam is.  To accept, to engage in conversation, to think again.  It’s an opportunity and we hope you’ll make the most of it.

Want a copy of your own?  Check out www.ispeakformyself.com/shop.

Copies of the book will also be available for a special discounted rate at the event on Thursday (details above).

4 thoughts on “I Speak for Myself: American Women on Being Muslim”