Zehra Imam is an alumna of the University of Michigan-Dearborn. She is currently designing a course, “The Patterns of Struggle and Triumph” to foster self-development within students. She is also working on “Desegregating Detroit in Delhi,”an experiential-learning fellowship to serve as an avenue for dialogue among student leaders in Metropolitan Detroit. 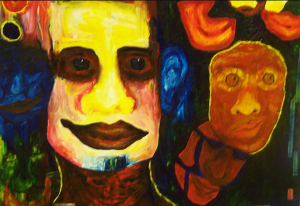 I’m not going to sugar-coat this complex terrain that is my motherland. My family immigrated to America due to religious and political unrest in Pakistan. I feel like my native land has grown to become a superstar since our family left – always in the news, always getting caught doing something that warrants a comment, always in the limelight. But something else other than natural ties still compels me to call a part of myself Pakistani and retain my dual identity of Pakistani-American. It has taken me a long time to say that I am from Pakistan with pride, and that I am choosing to live in America with gratitude.

I was fifteen when the attacks took place.

On September tenth, I was mostly anonymous: no one really inquired about my identity.

On September eleventh, my mother wisely told me to shut my mouth and not say a word about whatever my thoughts may be on this topic during school. Affiliated with the Muslim community, we were suddenly on the radar.

On September twelfth, my English teacher tried to lead a discussion about the events. Students expressed shock, remorse, concern. Finally, a Ukrainian-American classmate raised his hand hesitantly and said slowly, “But, I don’t quite understand… this stuff happens back in Ukraine all the time.” I spoke out then, without being called on, and responded, “But, this is America. Perhaps, an American life is worth more than a Ukrainian life.” Our teacher decided to conclude the discussion, maybe thinking we weren’t quite ready for September twelfth.

Shortly after September thirteenth, I put up a small American flag outside on our door. I didn’t want our house to be attacked. My aunt had already received threatening phone calls because my uncle’s full name has Muhammad in it, along with three other Arabic-origin words. I didn’t tell my friends or family outside the United States about the flag on our door. I suddenly felt caught between worlds. I listened uncomfortably to my brown friends in England and elsewhere say, “America had this coming. It deserved this. Now Americans know how the rest of the world feels. But now we have to brace ourselves for what it will do in response.” I argued with them, saying, “Who the hell deserves to be killed for no reason?” I, along with other Americans, felt under attack, but I couldn’t figure out exactly what that meant yet for me. I was horrified by the loss of life and at the calmness of the man who claimed responsibility for organizing the attacks. But, I too was worried about America’s response, which resulted in the grammatically incorrect “War on Terror.”

It is hard to be a Pakistani-American. My little cousin tells his classmates that he is of Persian origin because it sounds less threatening, more exotic. My brothers get extra special treatment at the airport, and sometimes I worry…if they’re having a grumpy day, will they be misunderstood? I’ve had my own struggles. I’ve come to believe that sometimes it is easier to be an Indian-American than it is to be a Pakistani-American. There’s less baggage involved. If you say you’re Indian, you’re not necessarily Muslim by default (which prevents unnecessary probing about religious beliefs), and it seems more appealing because, after all, India is travel-friendly for white people, has Bollywood, and American presidents seem to spend far more time there in the public eye than they ever would in Pakistan.

But, it has always been harder to be a Pakistani. On April thirtieth of this year, a couple of days before bin Laden was killed, it was my little nephew’s birthday in Pakistan. He is now seven. There was a party for his friends and the family; everything decorated, food arranged, tables set, balloons ready. But, there was a bomb blast, and no one could make it. These sorts of incidents used to cloud my mind before. They had symbolized what being a Pakistani meant to me. However, despite the seriousness of these conditions, my day-to-day experiences in Pakistan as a child were vastly different. Living in Pakistan constituted some of the best memories of my childhood. I was not only surrounded by strong support networks, where neighbor knew neighbor, but also by local heroes who had spent their lives in the service of those around them.

So when bin Laden was found in Pakistan, I was not surprised. I was uncomfortable, yes, but I did not decide to disassociate myself. Over the course of a decade, I finally allowed the presence of bin Laden and other extremists in Pakistan to be transcended by my memories of incredible people doing amazing work. I know for my Pakistani-American friends, this is still an on-going struggle, but I feel that I have found a method that allows me to come to terms with my ever-shifting identities.

It has taken me a long time to say that I am from Pakistan with pride, and that I am choosing to live in America with gratitude. Today, at twenty-five, I now find it possible to embrace both of the worlds that have shaped who I am.

In what way do you relate to Zehra’s experiences? Do you feel a strong connection to two distinct places or identities?

9 thoughts on “Becoming a Pakistani-American”