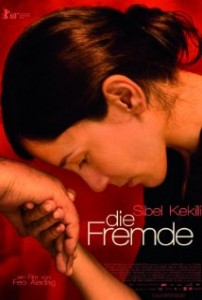 In 2010, journalist-actress-writer-director Feo Aladag released When We Leave (Die Fremde in German), an award-winning film that explores the hardships that characterize one young Turkish-German woman’s transition from a suffocating marriage in Istanbul back to a new life in her native Berlin. Despite her intentions of running from her abusive relationship, she endures further physical abuse from her husband, and is unsupported by her family in her decision to run away with her son. When We Leave blends a number of issues into one story–from Germany’s struggles with multiculturalism to the concept of honor in many Turkish families.

Aladag, of Austrian origin and married to a Turkish-German TV producer, spent a considerable amount of time understanding domestic abuse by living in women’s shelters as part of a human rights group’s domestic violence awareness campaign. When We Leave received press coverage from around the world (some thought it was robbed of an Oscar by The Academy) and gained further attention from the lead actress’ controversial past as an adult film star. Debates over the film’s merit will continue, but there is an issue of much greater importance that has received little attention: Does the film really help prevent honor killings, domestic violence, and other abuse among segments of Germany’s Turkish populations?

Katherine P. Ewing, UW-Madison Professor of Anthropology, questions the approach that Aladag and others in Germany are taking to combat violence against Turkish women. In a review of her book, Stolen Honor: Stigmatizing Muslim Men in Berlin, Stanford University Press writes, ” Ewing asks why and how these stereotypes—what she terms ‘stigmatized masculinity’—largely go unrecognized, and examines how Muslim men manage their masculine identities in the face of such discrimination…Ewing examines a series of controversies—including honor killings, headscarf debates, and Muslim stereotypes in cinema and the media—to reveal how the Muslim man is ultimately depicted as the ‘abjected other’ in German society.” You don’t have to search far to find a perfect illustration of Ewing’s point–just see this Spiegel article.

In a recent email to Inside Islam, Ewing explains how current events and Germany’s political climate have contributed to the creation of When We Leave:

“The 2005 murder of Hatun Surucu, a young Turkish-German woman, which closely paralleled the events in Die Fremde, did in some ways fit the label of a family “honor killing.” This murder led to intensified but unjustified stereotyping of Turks as ‘other’. In the wake of Surucu’s murder, reporters retroactively labeled 5 or 6 other Berlin murders as “honor killings,” even though these murders did not fit a single pattern and were not clearly different from other cases of domestic violence in Germany. The result is that while Germans are said to commit acts of domestic violence, those of Turkish background are said to commit “honor violence.”  This focus on honor killings thus incorrectly reinforces the idea that Turks and Germans are fundamentally different because of their cultures and that Turkish men cannot be good German citizens.  The idea that “honor killings” are a direct result of repressive Turkish culture also distorts the complexities of famiiy dynamics among immigrant families.  It obscures the fact that an important trigger for violence is not Turkish culture but rather the experience of pervasive discrimination as a minority in Germany. When We Leave may thus serve as a vehicle through which liberal groups promoting equal rights and right-leaning political parties become “strange and unintended bedfellows” by exaggerating cultural difference and intensifying anti-Muslim discrimination.”

In October of 2010, German Chancellor Angela Merkel admitted Germany’s failed attempt at multiculturalism, and cited Germans of Muslim backgrounds speaking the German language as the most important aspect of a “successful integration.” There are a number of issues at play in Germany, but unfortunately the xenophobic framing of the issue has narrowed the discussion and undermined any chance of decreasing domestic abuse against women and honor killings within Turkish-German communities.

Ironically, while honor killings and domestic abuse among segments of Turkish-German society are cultural in origin (both Christian and Muslim Turkish-German women fall victim to domestic violence), the best strategy to combat abuse and honor killings may come from religion. In the U.S., New York University Imam and NYPD Muslim Chaplain Khalid Latif has been outspoken about the importance of gender equity in addition to strong renunciations of violence against women from other Muslim-American religious leaders.

Honor killings, domestic abuse, and patriarchal households are topics of great concern in many Muslim communities. Undoubtedly, and unfortunately, most of these issues exist in the majority of countries around the world, but Muslims are often unfairly targeted as being the primary actors in such power structures, abuse, and violence.

In Germany, women of Turkish origin experience violence that can be prevented. The question is whether films such as When We Leave and other efforts that emphasize cultural difference actually help these women or have unintended consequences such as alienating Turkish men, and consequently leaving women by the wayside. Ewing argues that the outcry doesn’t need to necessarily change Turkish culture, but rather change the situation of women in some Turkish-German families.

One thought on “Violence Against Women: A New Direction?”