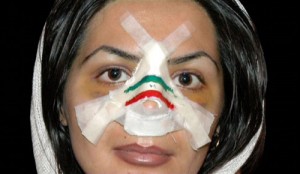 Yes, Tehran is the world capital of nose jobs. While western news concentrates a disproportionate amount of time on the occasional ridiculous statement from President Ahmadinejad and Iranian nuclear ambitions, other stories seem to be flying under the radar. In no way am I suggesting that homophobia, anti-Semitism, or regional security threats are unimportant, but there are myriad other issues that provide more insight into the lives of average Iranians.

For example, according to some estimates, 1 in 700 women in Iran has had a nose job. It may sound like a meaningless statistic, but the intersection of culture, sexuality, and the interpretation and practice of Islam in Iran through rhinoplasty may explain more of present-day Iranian society than the Ayatollah Khamenei.

On the blog “Stuff Iranians Like,” nose jobs hold the #4 spot. And while Tehran may be the most popular destination for the procedure, a significant number of women and men of Iranian descent fly from Los Angeles, London, and other cities around the world to have the procedure performed by one of the thousands of Iranian rhinoplastic surgeons. If you think that this is just a passing fad, tell that to the bankers who lend thousands of $300-$3,000 loans to new nose-seeking Iranians every year.

Women (ages 9-45) and men (ages 15-25) eagerly pursue a smaller nose and are usually unfazed by the pain and risks associated with the procedure. Aside from the classic British portrayal of the hyper-sexualized “other,” this short film provides insight into the world of one young woman’s nose job operation in wealthy North Tehran.

Some rhinoplasty surgeons attribute the procedure’s popularity to Iranian women’s insecurities driven by the popularity of Hollywood movie stars (usually white women with small noses). Academics often cite classical Persian literature referencing beautiful women with small noses, while others claim that the Iranian law requiring a woman to dress modestly has led to an increased obsession with physical appearance. The front portion of the head and the face are usually the only publicly visible parts of a woman’s body. “Because of the hijab women have to wear, the face becomes the most prominent part of the body,” notes Nabiola Shariati, a famous Tehran-based plastic surgeon.

State-imposed restrictions on women’s dress may play a role in the popularity of rhinoplasty in Iran, but it does not account for the men who receive the procedure. Furthermore, other majority Muslim countries with no state-regulated dress code also have a high number of women who receive nose jobs; Lebanon comes to mind.

The final factor of consideration relates to what Islam says about physical appearance. Past Inside Islam posts explored sexuality in Iran and Saudi Arabia, but it’s important to distinguish between a societal practice and a thorough review of Islamic law in relation to physical appearance and other issues related to sexuality. As an example, Ayatollah Khomeini provided Iranian society with his religious blessing to rhinoplasty in the 1980s, citing the Hadith: “God is beautiful and loves beauty.”

In 2007, The International Islamic Fiqh Academy (IIFA) explored the issue of plastic surgery during a conference in Malaysia. IIFA scholars defined plastic surgery as “any surgical procedure performed for the sake of beautification (modifying a person’s appearance) of one or more parts of the external human body or restoring its function, if significant impairment has occurred.” Here’s a summary of the main points they also offered in relation to plastic surgery:

Like any other faith tradition, Islam has a wide range of interpretations. The Islamic Republic of Iran is governed by religious clerics, and so it is fair to assume that the state allowing rhinoplasty and other forms of plastic surgery is one interpretation. The IIFA offers a very different interpretation and provides an alternative perspective on the utility of such procedures.

Regardless of what Iranian clerics, the IIFA, or other Islamic religious authorities say, it is clear that rhinoplasty and other forms of plastic surgery have become an accepted part of present-day Persian culture. Scholars, surgeons, pop culture, or anyone else may disagree about the origins of the craze, but it’s here to stay.

What do you think about rhinoplasty and its relationship to Islam? Do you know someone who is Muslim and has had plastic surgery?