Julia C. Hurley is a human rights advocate and speaker on Palestinian rights. Hurley also works with American Friends of UNRWA, promoting their Adopt a School Campaign, which she initiated in 2010, and she volunteers with the Greater DC Chapter of the Palestine Children’s Relief Fund. Hurley is currently speaking at American universities  on the conditions in Palestine and what Americans can do about it with her talks, “Images of Hope: One Woman’s Journey to Palestine & Back.”

Growing up in suburban New Jersey, I was always exposed to different people and cultures. I was comfortable with diversity and never felt I had to fear or hate another group of people. My parents instilled in me the idea that we should always be concerned for people and do what we can to help anyone, regardless of race or religion, simply because they are our fellow human beings. I never judged based on these criteria before, but September 11th changed that in a way.

I will never forget that morning. The images of the towers burning and the horror I watched unfold is etched in my mind, as it is for most Americans. I was 14 years old and in my first week at Immaculate Heart Academy in Washington Township, NJ, I would come face to face with the reality of what a more globalized society meant. I no longer felt safe in my bubble in Northern New Jersey and was solidly convinced that an entire population of people were ignorant, uneducated, and wanted me and my fellow Americans dead. I was afraid; I was naïve; and I directed this anger and fear toward Muslims and Arabs. Fox news instantly became my source for information and I fell in line with the Bush Doctrine and the War on Terrorism.

This continued into college, despite many heated arguments with my parents, and I started my freshman year at the School of Diplomacy at Seton Hall University convinced I was going to help the War on Terror by joining up with the State Department, cheered on Bill O’Reilly at night, and hung my giant American flag on my dorm room wall. 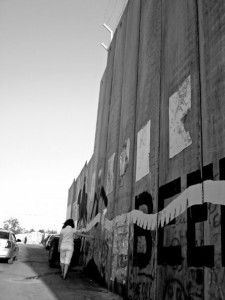 As I began my classes, I kept this fear-filled, naïve mindset, and faced quite a bit of opposition during debates. My Arabic class, though, would be the one that would begin my transformation. My professor, Issam Aburaya, was Palestinian and constantly challenged us to see the situation in the Middle East from a different perspective before we began class. Suddenly little cracks began to appear in the giant wall of intolerance I had built around myself. I had never been presented with this information from a Palestinian before. How could I argue with someone who lived this?

Now that there was at least a crack in the wall, I began to see that not all Arabs and Muslims were as bad as I thought, but I still kept the attitude that the vast majority were still against my beloved country and the policies we were pushing forward were necessary. During my sophomore year, a Palestinian-American friend helped chip away at this crack even more, as did another friend who supported the Palestinian cause. Next thing I knew, I was seeing the documentary, Occupation 101, at the Harlem Film Festival in New York City, crying my eyes out, standing up after the screening to tell the directors, who were present, that they had changed my life. Finally, the epiphany moment: I suddenly knew why many Arabs and Muslims were angry with us and why a tiny fraction took that anger to an extreme. Our policies in the Middle East were killing their children and ruining their lives, and actually making us less secure as a result. We had the same reaction when we were assaulted on 9/11.

The Fall semester of my junior year, I decided it was time to see life in the Middle East for myself, and I went off to the American University in Cairo to study Arabic and live in the heart of Cairo for five months. I would come back a different woman. I fell in love with the Middle East and was welcomed with open arms everywhere I went – in Egypt, Jordan, and the West Bank. I drank more tea than I thought possible. That was what the Arabs and Muslims of the Middle East do. They welcome you with cups and cups of wonderfully sweet tea. I remember being scared to admit I was an American when I first got there, but was pleasantly surprised when the first time I was asked where I was from, I gulped, muttered “America,” and had a jovial cab driver inform me “America?! We LOVE Americans! We just don’t like your government so much.” This was the part when I breathed a sigh of relief and my defenses came down. I truly was welcome. 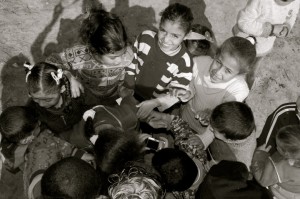 Since that time, I have ventured to the Middle East twice more, backpacking from Istanbul to Cairo and delivering humanitarian aid to the Gaza Strip. During both trips, I was welcomed again, sometimes feeling as though I were an old friend and even family. The Middle East that I once feared, the Arabs and the Muslims I once thought would kill me the first chance they got, now have a deeply special place in my heart. This is the view most Americans never get the chance to see, but if we would all just open our eyes a bit wider, as I once did, our entire world can be transformed.

If you have a personal story that you would like to share, we’d love to hear it. You can share it or comment on Julia’s story below. Or you can email us at blogislam@insideislam.webhosting.cals.wisc.edu.

13 thoughts on “My Eyes Wide Open”