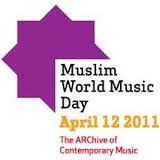 Yesterday, the ARCive of Contemporary Music organized Muslim World Music Day. The project coordinated live concerts and archived a variety of musical traditions, creating a database of knowledge and resources on music related to Muslims and Islam from dozens of countries. Scholars, artists, and music collectors from around the globe contributed to what is truly an amazing catalog of information on music composed by Muslims and non-Muslims over hundreds of years. There’s even a section of photos of album covers from various decades of the 20th century, showcasing a diverse set of music.

The impressive amount of material available on the website also includes a wide array of photos, videos, and articles depicting a disturbingly frequent orientalist notion of Middle Eastern women–Arab belly dancers. Sheetmusic, or popular song sheet music books kept inside lift top piano stools in late 19th and 20th century American parlors, provide further insight into previous western conceptions of the “exotic, eastern other,” many of which continue on today.

I don’t want to overemphasize the material that the project dedicates to highlighting western depictions of the “eastern other,” because this was only one aspect. Take a look for yourself and find your favorite artist from their long list of musicians, or learn about the varieties of musical instruments used around the world. The project also offers a great menu selection (on the right side of this page) of various genres of music if you’re not sure what you might like.

More than anything, Muslim World Music Day showcases a variety of musical art forms and clearly demonstrates the great diversity of influences that go into creating these pieces. While some of the musical works offered are clear representations of Islamic religious interpretation and expression, a vast majority are produced by people of Muslim origin, unrelated to Islam. When one hears the words “Muslim” and “Islam,” many people immediately access a particular image or notion in their mind. This project is yet another subtle example of the false nature of monolithic conceptions of “Islam” and “Muslims.”

What do you think of when you hear the words “Muslim Music?” What are some of your favorite Muslim artists?