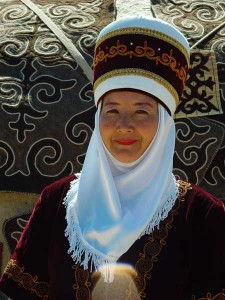 For instance, the Bubu shaman women teach Islamic practices to young women in the villages in their homes. They promote the youth’s religious piety, teaching them how to correctly pronounce Koranic verses in Arabic. Consequently, the Bubu’s female students themselves are among the majority accepted to Islamic degree programs of higher education in Kyrgyzstan. Moreover, the Bubu themselves are highly respected in the villages where they live, transmitting religious and traditional knowledge to the young women.

The Bubu have historically played the important role as guardians of faith during the repressive Soviet times, since the Soviet authorities banned religious practices in the public sphere. One significant role of the Bubu was to teach their students about the importance of local sacred sites, or mazars in the Kyrgyz and Arabic language. In Kyrgyzstan, people still gather in those sacred sites to celebrate holidays and family events, making sacrifices by slaughtering sheep to honor the spirit of the holy place.

The Bubu came to be regarded as the protectors of these holy sites, which are found throughout the country and respected throughout Central Asia. The most famous holy site in Central Asia is Suleiman Mountain, located in the city of Osh, and is often referred to as the Mountain of Tahti Suleiman. As it was forbidden for Muslims living under Soviet rule to travel to Mecca, Central Asian Muslims performed the pilgrimage to Suleiman Mountain instead, referring to it as the “Second Mecca.”

In post-Soviet Central Asia, the influence of the Bubu has grown stronger. For example, in the 1990’s, a journalist, Ahmed Rashid, observed that the local people in the Pamir Mountains treated religious women who took care of holy Sufi shrines with enormous respect. The Bubu assist female pilgrims who pay respect to these sites with the desire to have a male offspring, or to recover from illness. As an undergraduate student at the American University – Central Asia in Kyrgyzstan, I also had an opportunity to witness a Sufi ritual, Zikr chaluu, in Naryn oblast in 2003. I saw several Bubu chant Koranic verses in supplication to Allah, where the female patient was part of the ritual to obtain the blessing for curing her infertility.

The Bubu contributions to the religious life of Muslim women throughout Central Asia have been significant and should be studied further. When examined closely, it appears that the Bubu have challenged the traditional religious authority of male–dominated Muslim institutions in Central Asian societies, and have thus significantly shaped the daily, non-institutional religious practices of women. Within such a context, Bubu have inspired many Muslim women to support a variety of informal religious practices that, while not openly challenging Muslim Orthodoxies, have engendered private religious practices that have directly impacted many aspects of family life, particularly those centering on women’s and children’s health issues.