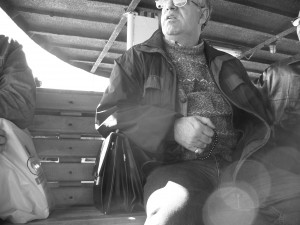 From Tirana to Tetova, they can be seen in public and in private, hanging from the rear view mirrors of taxis, and lying atop intricate prayer rugs. For some, tespihe (“prayer beads” in Albanian) are used as religious, intentional acts of worship and remembrance of God–zikr. For most Albanians however, sliding the 33 circularly attached beads through one’s fingers has been stripped of its religious significance. Now, tespihe represent a tradition or habit Albanian men saw their father’s fathers pass time with while sipping small cups of thick, muddy-colored coffee in the town square.

For almost 50 years, Albania’s communist rulers officially banned formal, public acts of religious worship. Albania was the world’s first atheist state, but spiritual habits and remnants of Islam brought through Ottoman rule in the 15th century remained. Interestingly, tespihe–first used in Hindu practices, and subsequently by Buddhists, Christians, Sikhs, Bahais, and other religious groups– originated early in Islamic history as a way for Muslims to remember the 99 names or attributes of God (often with 33 beads rotated through three times). In modern day Albania, tespihe are used by both Muslim and Christian men, most of whom are older.

Today, Albania is experiencing a small, but noticeable religious resurgence, with both Muslim and Christian congregations increasing in size. New churches and mosques are being built, and old spaces of worship are being restored. However, although 70% of Albania’s population identifies as Muslim, the majority of people neither actively practice nor care to learn about Islam. Panayot Papadam, a native of Albania and student of its history, suggests that the slight Islamic revival in Albania may even be linked to improved relations with the Turks, a counterbalance to Greeks who are seen as colonizers by many Albanians.

In a recent interview with Inside Islam, Papadam spoke of tespihe and its relationship to the dynamics of present-day Albania.

“When religion was banned, tespihe were not, so their popularity spread to all people, [and tespihe were] reinvented as something to pass the time. Very few young people, even religious ones, use them for the purpose of aiding them in their daily prayers. This may be a result of the disassociation that the ban on religion caused between the object and its religious significance. Religion of all denominations has a very curious flavor in Albania. It’s difficult for Albanians to associate with rituals that other nationalities consider essential to practicing their religion, and in this respect, communism fostered a very critical and ‘scientific’ examination of these superstitions.”

The use of tespihe in Albania is illustrative of the dynamic nature of ritual. In Islam, or any other faith tradition, habitual actions related to a spiritual tradition can be ambiguous. Without the historical background and understanding of a particular context, an act of habit and/or culture can easily be misinterpreted as an act of faith.

Have you ever seen religious rituals and wondered about the origin and intentions of the person? Can habitual ritual lead to belief, if the person’s initial intention was not one of spiritual inclination?

One thought on “Tespihe in Albania”