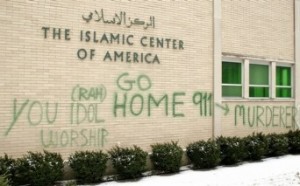 Hate rallies against Muslims and Islam have increased

The above were among the words used by anti-Islam protesters in Orange County, CA, as Muslim men, women, and children peacefully entered a fundraiser benefiting a local women’s shelter and homeless services. Local councilwoman Deborah Pauly was met with loud cheers as she told the crowd of hundreds,  “I know quite a few Marines who will be very happy to help these terrorists [the peaceful people at the fundraiser] to an early meeting in paradise.” Other epithets from the crowd included “Muhammad was a pervert,” “Muhammad was a false Prophet,” and “One nation under God, not Allah.” (Just to clarify, Allah is the Arabic word for God, and is used to refer to God by Arab Christians, Arab Jews, and Muslims.)

Today, U.S. Representative Peter King (R-NY) will chair a hearing on the “extent of radicalization in the American Muslim community and that community’s response.” Some have compared the hearing to a modern-day witch hunt and made parallels to the hearings of former U.S. Senator Joseph McCarthy in the 1950s. King contends that this isn’t a witch hunt and has said that “The overwhelming majority of Muslim-Americans are outstanding Americans.” King says that his primary motivation is to prevent another 9/11. He has repeatedly told the media that law enforcement officials have complained about not receiving an acceptable amount of cooperation from “the Muslim community.”

Politicians, academics, law enforcement officials, and Muslim-American community leaders may disagree about the amount of cooperation members of Muslim-American communities have provided to law enforcement in preventing Islamic extremism from taking shape on U.S. soil. CNN reported that “a recent study from the Triangle Center on Terrorism and Homeland Security said tips from the Muslim community thwarted 48 out of 120 terrorism cases involving Muslim Americans.” That certainly seems to be a significant involvement and cooperation by the Muslim community.

(Some are wondering where the Obama administration is on this, and there’s indication that there’s a quiet acceptance, even approval.)

The King hearings are sure to fan the flames of what is already a tense situation. Days after the anti-Islam rally in California, two elderly Sikh California men were shot, one fatally. Law enforcement officials speculate that the shooter believed the traditional Sikh turbans and beards of both men as being “Islamic” in origin. The California hate rally has also gained international attention, and has turned into a precious recruiting tool for violent extremists abroad.

Islamic extremism is a very real threat and does not originate solely outside of U.S. borders. The best way to prevent Islamic extremist ideology and violence perpetrated by Muslim-Americans is for Muslim-Americans themselves to work in collaboration with law enforcement. Holding an entire faith community on trial will accomplish no progress towards reaching this goal. At this rate, hate rallies will continue on, and both extremist ideologies–Islamophobia and anti-Americanism–will gain ground on the more reasonable masses in the center. America will stray further from its foundational principles and we will all be in more danger because of it.

Next Wednesday, March 16 at 3 PM CST, a new Inside Islam Radio Show will explore the King Hearing and gain insight from Ingrid Mattson, former President of the Islamic Society of North America.

One thought on “Muslims “Go Back Home!””