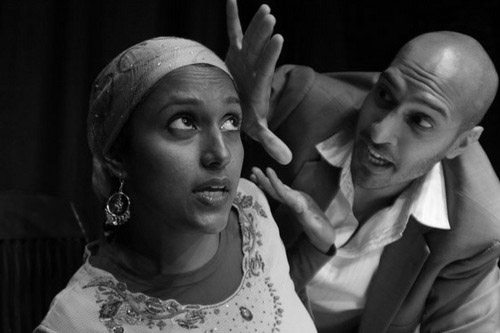 Domestic Crusaders explores the lives of a Pakistani-American family

In 2001, Wajahat Ali was an English major at UC-Berkeley studying under the guidance of Professor Ishmael Reed. Reed saw a unique talent in Ali and pushed him to explore the lives of Muslim-Americans. Ten years later, Ali’s play, Domestic Crusaders, has sold out theaters across the country and is the first Muslim-American play published as a book.

The two-act play explores the inner dynamics of a contemporary, suburban Pakistani-American family and the trials and tribulations of living as Muslims in a post-9/11 America. Politics and  identity are unabashedly front and center in the play, and humor dominates the mood of many scenes. All of the characters in the play are fictional, but Ali based them on his own experiences and “a lifetime of being American, Pakistani, and Muslim.”

Domestic Crusaders is a realistic portrayal of the nuanced, and at times contentious, viewpoints of a Muslim Pakistani-American family on a range of controversial topics. “These characters say things sometimes that I don’t agree with,” Ali said.

And that’s what makes it so believable. All three generations of the family come together to celebrate the youngest son’s 21st birthday, and nearly every moment of the play demonstrates the love, conflict, and diversity of this–and every–family.

The play has also been embraced by big names such as Emma Thompson and Toni Morrison. Author Mitch Berman said that Domestic Crusaders “is to Muslim American theater what A Raisin in the Sun is to African American theater.”

For now though, Domestic Crusaders has yet to be fully embraced by the top of the theater industry food chain.

In a phone interview with Ali, he told Inside Islam that the “fear is twofold: will a play with brown characters be well received by white people, and will there be a backlash because the play is about Muslims? … Sixty percent of Americans don’t personally know a Muslim. … Theater is actually very conservative in the audience, and the gatekeepers are mostly white males.”

Ali says that there has been hesitancy in New York from artistic directors, wondering not about its quality or authenticity, but whether it would be accepted by a Broadway audience. “I had to prove to the gatekeepers that if you build it, they will come. I had to prove that this product would generate revenue and be popular … and now we’re at a tipping point.”

Domestic Crusaders is looking at performances in England, Germany, and Dubai. HBO is working with Ali on a pilot show about a Muslim-American cop in the San Francisco Bay area. A novel, movie script, and comic book are also in the works and the 30-year-old Ali is balancing the success generated from Domestic Crusaders with his work as a solo attorney. But Ali recalls the time when things weren’t quite as smooth:

“Nine years ago, my entire community thought I was being useless. … Ninety percent of Muslim-Americans are doctors, lawyers, or engineers. There was active discouragement by elders to dissuade those who had talent to come to these [artistic] fields. … People think I’m insane now for being an attorney who doesn’t go after the bling. We had to beg people to give me money. My Mom fed my cast lunch and dinner. The same community that rejected me, embraced me in 2008 and 2009, and helped me financially. … And now they’re teaching the play at the University of Minnesota and Berkeley.”

Ali also spoke of the importance of Muslim-Americans engaging in the arts and other fields where Muslims are substantially underrepresented.  He sees Muslim-Americans’ gravitation towards a subset of high-paying, prestigious professions as a barrier to non-Muslim Americans understanding Islam and the cultures that Muslim-Americans come from.

“If you are unwilling to engage and invent and participate, then you shouldn’t complain about being an outsider. Don’t just be a cultural consumer; you also have to contribute by being a cultural creator. … It’s a tragedy in part of our own making. But if we don’t stand up and take the risk, no one else will. If we don’t do it, who will and how will things get better? Our parents took the risk of leaving their homeland. Our risk is taking the untrodden path of breaking into these new fields.”

One thought on “Domestic Crusaders”