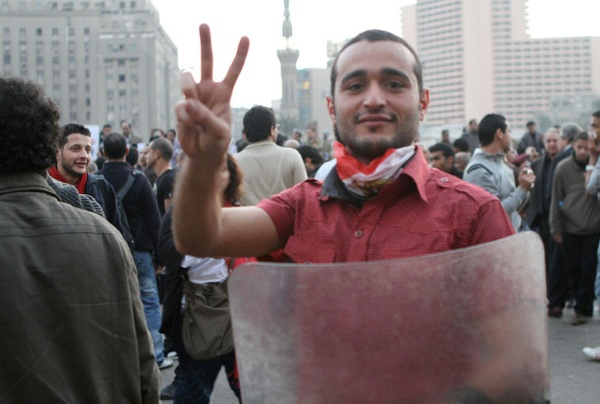 Perhaps surprisingly, there’s nothing scarier for Al-Qaeda, Hamas, and other radical groups–each aiming to achieve different goals–than the Arab people overthrowing their U.S.-backed dictators to achieve democracy and other freedoms.

With Tunisia’s leader ousted, the Jordanian Prime Minister sacked, Yemen’s dictator agreeing to bow out for 2013 elections, and Egyptian President Hosni Mubarak seemingly on his way out, the rhetoric of violent Islamic radicals is being lost. The best recruiting tool for extremists is for these repressive regimes to remain in power and continue to be backed by American financial and geostrategic interests.

Regardless of whether Mubarak falls in the coming days or months, the Egyptian people and those of other Arab countries are likely to have more accountable governments in the near future. And that’s bad news for Osama bin Laden and others recruiting young men from Saudi Arabia, Yemen, and other countries in the region. A non-democratic Middle East filled with despotic regimes is the perfect atmosphere for radical, violent Islamists to seek out new recruits.

While the repressive regimes of Sudan and Saudi Arabia seem far from crumbling at this point, protests have already started and could create further problems for violent extremist recruitment efforts if democratic reforms continue. Al-Qaeda and other violent, radical Islamists won’t be disappearing anytime soon, but they’ll have to start looking for new rhetoric as the Middle East becomes increasingly democratic.

Why do you think many terrorist organizations have been relatively silent in the past few weeks in response to the protests in the Middle East? Is radical Islam being shut out further by the protests in Tahrir (Liberation) Square?

3 thoughts on “What’s at Stake for the Radical, Violent Islamists”