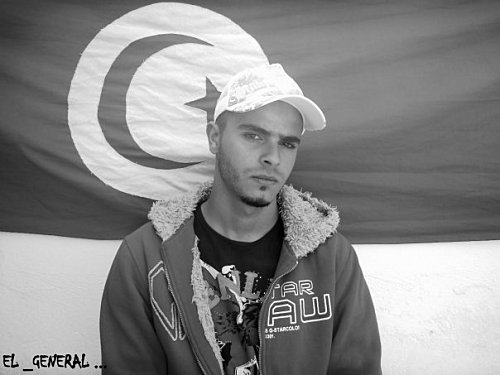 The forces behind the Tunisian and Egyptian revolts were widespread, coming from the religious and secular spheres, the intellectuals, and the working, middle, and upper classes. Millions called for justice and regime change and were victorious in achieving significant steps toward more democratic societies.

Most protesters were under the age of 25 and lived their lives very differently from the military-dominated dictators that they helped overthrow through non-violent means. Twitter, Facebook, and other social media have been cited as foundational to the protest efforts (and certainly at times overstated), but there’s one form of media that has received far less attention: revolutionary Arab hip-hop.

Enter El General (Hamada Ben Amor). The 21-year-old Tunisian rapper was at the center of the Tunisian revolution. He released Head of State in late December 2010 following the self-mutilation of Tunisian fruit vendor Muhamed Bouazizi that sparked protests around Tunisia. In Head of State, El General talks of a President (former Tunisian President Ben Ali) who pillages his own people and watches them starve on the streets (lyrics and video). While El General references common Muslim proverbs and sayings in his music, his sound cuts across all categories, and reaches out to a broad audience, both religious and secular.

El General was taken into custody by state authorities days after the release of Head of State, which resonated widely with Tunisian and Arab youth around the North African region. His family and fans were convinced that he would be tortured and killed, as many before him had been. To the surprise of all, El General was released weeks later and rapped in front of thousands in an emotional performance in Tunis. The mother of  Muhamed Bouazizi, teary-eyed and inspired, cheered among the largely young audience.

But let’s not forget that others have been a part of this North African revolutionary hip-hop movement before El General came into the limelight. Almost two years ago, Abdulla Darrat, a Libyan exile, and a few other rappers created the website Khalas, or “enough” in English, to speak out against the injustices of the dictators in the region. A common, and multipurpose word in Arabic, Durrat says that, “The word khalas has a sense of fed up, but also a sense of loyalty to that cause as well.” Darrat and other rappers from Tunisia, Algeria, Egypt, and Libya recently released a mix tape called Khalas Mixtape: Vol. 1Mish B3eed. The faces of Ben Ali, Mubarak, and Qaddafi are all on the CD cover. If history continues to follow the calls of justice from El General, Darrat, and others, they’ll have to find other Arab dictators to rap about, as they’re falling fast these days.

What do you think of El General, Abdulla Durrat, and other Arab rappers calling for justice in the Middle East? Does Arab hip-hop really have an influence on the revolutions sweeping across the Middle East? Please share your thoughts.