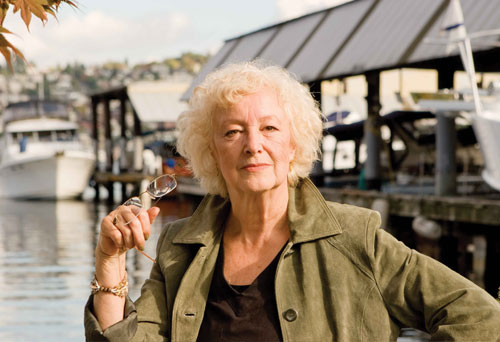 This fall, author Lesley Hazleton gave a TED talk in Seattle, offering her own interpretation of the Qur’an as an agnostic Jew. Hazleton’s nine-minute presentation, attended by a predominately white, middle-aged, non-Muslim American audience, stemmed from extensive research on the Qur’an and her experiences with Middle Eastern Bedouins. Her raspy, light British accented voice seemed to perfectly complement her academic vocabulary and witty sense of humor, and the audience quickly warmed to her style and intent in countering common negative stereotypes of the Qur’an.

Throughout the talk, Hazleton offered her interpretations of the Qur’an and emphasized the importance of understanding verses through a contextualized analysis only.

“Part of the problem I think is that we imagine that the Qur’an can be read as we usually read a book, as though we can curl up with it on this rainy afternoon with a bowl of popcorn within reach, as though God–and the Qur’an is entirely in the voice of God speaking to Muhammad–were just another author on the best seller list. The fact that few people do actually read the Qur’an is precisely why it’s so easy to quote, that is, to misquote phrases and snippets taken out of context in what I call the ‘highlighter version,’ which is the one favored by both Muslim fundamentalists and anti-Muslim Islamophobes.”

Hazleton described how she spent three months on her Lake Union houseboat delving into the historical background of Qur’anic verses and the meaning behind various statements. Hazleton utilized her latest book, After the Prophet, four well-known translations of the Qur’an, and an Arabic-English dictionary as resources. During the TED talk, she spoke of “how flexible the Qur’an is, at least in minds that are not fundamentally inflexible,” and recounted this discovery as “perhaps the biggest surprise.”

In one example, referencing the Islamic law that allows for Muslims to kill non-Muslims, she explained the comprehensive set of qualifiers, all of which must be met to validate such an act:

Hazleton completed her interpretation by adding,”and even then, God is merciful, forgiveness is supreme, and so essentially, better if you don’t [kill them].”

“The phrase, ‘God is subtle’ appears again and again, and indeed the whole of the Qur’an is far more subtle than most of us have been led to believe, as in for instance that little matter of virgins in paradise.” Hazleton explained that “old-fashioned orientalist” interpretations of the Qur’an referenced huris as “dark-eyed maidens with swelling breasts” promised in heaven. She explained that her research indicated that huris are more accurately interpreted as pure beings, or angels, “but the truth is nobody really knows, and that’s the point.”

Hazleton added that we “may have heard about the Qur’an’s idea of paradise being 72 virgins. . .There are no 72 virgins in the Qur’an. That idea only came into being 300 years later, and most Islamic scholars see it as equivalent to people with wings sitting on clouds and strumming harps.”

Aside from the substance of Hazleton’s TED talk, the relevance of the presenter and reception it received is exceptionally notable. When Muslim men or women talk about their faith in a constructive, peaceful manner, it often conjures up negatives responses-skepticism, conspiracies, and hatred are more likely. Portions of the public in the US and other western nations do not seem to be ready to hear what Islam means to Muslims themselves. Hazleton and other non-Muslims are offering their own perspectives on Islam in hopes of  convincing skeptics that Islam is a legitimate faith worth recognizing.

Is it inaccurate to assume that white women, of Jewish or any other non-Muslim background, are seen as more legitimate voices than Muslims’ when describing what Islam is? Does one have to fully experience and believe in a faith in order to most accurately describe it to non-believers?

26 thoughts on “A Jewish, White Woman’s Perspective on Islam”