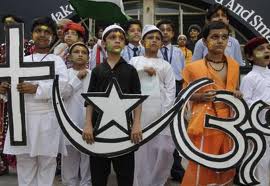 India’s secular democracy was tested with the latest ruling from a regional High Court dividing up the land of a religious site holy to both Muslims and Hindus. The disputed area lies in the center of Ayodhya, a sleepy north Indian town that normally sees more cows in the street than cars.  But it hasn’t always been sleepy.

In 1992, tens of thousands of Hindu extremists destroyed a 16th century mosque, citing the mosque location to be the exact spot where Hindu Lord Rama was born 3,500 years earlier. Following the destruction of the mosque, riots broke out in the streets of Mumbai and other large Indian cities in late 1992/early 1993 and approximately 2,000 Indians were killed, both Muslims and Hindus.

In the days preceding the final verdict, predictions of widespread communal violence permeated a good portion of media outlets inside and outside India. Hundreds of thousands of troops were deployed around the country, in anticipation and deterrence of communal violence. Despite the media hype, seemingly every religious community in India stressed the importance of remaining calm, and not one person was reported to have been injured.

While legal scholars and historians will continue to debate the fairness of the ruling–awarding Hindu groups two thirds of the land and a Muslim group the remaining third–it is clear that Indian religious fundamentalists either stayed home or aren’t nearly as numerous as Indian and Western media outlets forecast them to be. This peaceful reaction by Muslims and every other religious group across India failed to make headlines in the US, leaving one to wonder how often other media-projected religious tensions and violence never materialize and then go unreported.

Did you hear about the peaceful public reaction throughout India following the ruling last month? Have there been controversial rulings or religious tensions in your own community that ended in a peaceful manner? We want to hear from you, so please leave a comment below.

2 thoughts on “Where Are the Violent Muslim Extremists?”