This is the fourth part of our series, Media and Islam. Previous parts explained why we started the series and examined Al Jazeera and Global Voices. 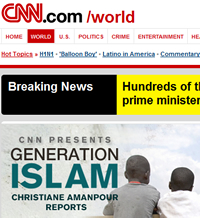 “Everyone is entitled to his own opinion, but not to his own fact,” said US Senator Daniel Patrick Moynihan. News media’s job is to give the public both facts and opinions, but labeling each clearly so as not to confuse or mislead. Facts should carry more weight in media coverage and be the basis of opinions voiced in media.

Using this criterion to assess the coverage of Islam and the Muslim world by the three major US cable news networks, I find that CNN outperforms Fox News and MSNBC even though it lost 30% of its viewers in 2009 while Fox News gained 7% and MSNBC fell 12%.

First, CNN is more committed to news gathering. Unlike generating opinions, gathering facts requires having reporters on the ground knocking on doors, talking to locals, and sifting through documents. Statistics show that CNN has more correspondents in more Muslim countries than what Fox News and MSNBC have combined. The financial commitment by CNN is also the biggest among the three, with Fox News spending the least on newsgathering. Second, CNN is more neutral. As reported by the Guardian, Fox News caters to the conservative audience and MSNBC to the liberals, “championing the opposite causes to Fox but with the same style and passion.” As the oldest cable news network who pioneered the industry, CNN has decided to stay the course as a centrist “with its commitment to calmer, unbiased coverage” for an audience that prefers more facts than opinions. Research by the Pew Project for Excellence in Journalism confirmed that “unlike MSNBC and Fox News, CNN’s programming did not tack in an overtly ideological direction.”

One great example of CNN’s coverage of Islam is its Generation Islam series produced by highly respected international correspondent Christiane Amanpour. Sixty percent of Muslims in the Middle East are under the age of 30, so Amanpour took viewers to Afghanistan, Pakistan, and Gaza to hear personal stories and thoughts of young Muslims, including a would-be suicide bomber and an al-Qassam militia. Without flashy production or dramatization, those stories are honest and poignant, some of the best in today’s media coverage about Islam. Growing up in Iran, Amanpour has intimate knowledge about the Muslim world. She does not tell audiences how to think, but rather focuses on showing real lives. Her respect for facts and for viewers’ intelligence is in great contrast to many talking heads on TV.

Have you watched Generation Islam? What’s your reaction? How do you like the news coverage of the Muslim world by cable news channels?