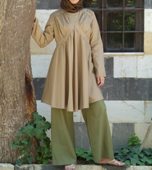 One of the assumptions about Islam that never seems to dissipate is that Islamic law is this rigid and incredibly harsh system that exacts punishments that are beyond what is tolerable in Western societies. Moreover, so the common discussion goes, when this law falls on women, it often means that they will be unfairly subjugated. Is any of this true? An article in the New York Times about Lubna Hussein, the Sudanese journalist who faced lashing for wearing pants, reminded me how much these issues infiltrate discussions on anything in the Middle East and Islam.

Hussein was convicted of indecency charges when she was found wearing pants. Under Sudanese law, the punishment for indecency is lashing. After refusing to pay the fine, Hussein was then jailed for a month and released September 8th on bail. What is significant for me in this story is the unquestioning assumption in the mainstream media that what a country rules is “Islamic law” actually reflects worldwide Muslim opinion. Islamic law is a product of certain laws outlined in the Qur’an and the interpretation of Muslim jurists throughout history. Many issues that we face now can be likened to earlier interpretations, but sometimes it is just a stretch. For example, some might be aware that in Islam the punishment for rape is 100 lashes. Now if the punishment for a heinous crime like rape is 100 lashes how would it make sense that “indecency”–especially when it is unclear what that means–would mean 40 lashes, or any lashes at all?

This issue of what constitutes Islamic law needs to be revisted over and over again and mainstream media needs to be able to discuss things about Islam without furthering the divide. We should all know by now that one interpretation of “Islamic law” can not possibly represent the understanding of over 1.3 billion Muslims.

From my own experience growing up as a Muslim woman, I feel there are challenges for Muslims not only outside their communities but also within them. There needs to be a renewal of the Prophet Muhammad’s message of kindness and justice in maintaining a society. There is a story that illustrates the spirit of his approach. When a bedouin came to the mosque in Medina and started urinating, some of the Muslims were infuriated and wanted to go and reprimand him right way. The Prophet, though, waited until the man finished and went over to him with water to wash the spot. He gently told the bedouin that this was a place of worship and his behavior was not appropriate. Because of the Prophet’s kind approach, the Bedouin became Muslim. What this story highlights is that while there are parts of Islam that are stringent, Muslims are always implored to be kind and just. Punishing a woman for wearing pants with lashes does not reflect the spirit of the faith. And furthering the negative image of Islamic law by claiming this is part of it goes fundamentally against the faith.

Do you think there is a space for religious laws? Do you think that followers of a faith can lose sight of its message? Should a faith be judged by its followers? Please share your thoughts.

6 thoughts on “Can a Muslim Woman Wear Pants?”