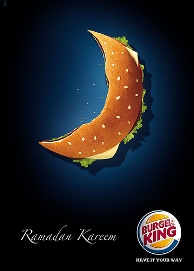 Around August 22nd, Ramadan will begin. Ramadan,  as I mentioned in an earlier post, is supposed to be a month of fasting, increased reading of the Qur’an, and prayer. In the 20th century, the spirit of Ramadan has taken a different turn in parts of the Muslim world, where commercialism has tapped into the financial potential of the month. This aspect of Ramadan is most obvious in the Middle East where for many Ramadan has become a month of feasting, increased shopping, and parties! In the United States, while there are some companies such as Hallmark which are starting to make greeting cards for Ramadan and Eid ul-Fitr (the holiday marking the end of Ramadan), Ramadan has yet to be as commercialized as Christmas.

In the Middle East, on the other hand, Ramadan has become a cultural and social event and companies are playing on that reality. Malls are open late, if not until dawn when Muslims begin their fast again. Hotels and restaurants have Ramadan feasts with the possibility of prizes for the 30 or so days of fasting. “Ramadan tents” are set up where a person can go eat dinner and enjoy shopping promotions. The most obvious sign of this commercialization that can be accessed worldwide through satellite dishes is the television series aired throughout the month. In the Arab world, in particular, directors and producers will spend all year preparing their shows so that they make the cut to be shown during the prime time hours of Ramadan. According to Hassan M.Fattah: “Ramadan is like a 30-day Super Bowl weekend.”

In the United States, it is not that Muslims are more pious, but rather that American companies seem to be hesitant to tap into the Muslim American market. Muslim companies, however, do find that their sales increase during the month and try to cater to the community. This cannot be compared to the extravaganzas that are seen in the Middle East that for some add an air of excitement to the month and for others seems to strip the month of its spirituality. We will be exploring the different aspects of the month of fasting, including the commercial aspect, on the next Inside Islam show airing during Ramadan.