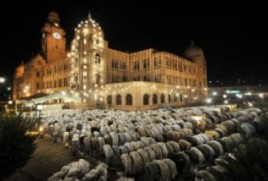 The ninth month of the Islamic calendar is the holiest month of the year. In order to begin the discussion on Ramadan in my posts this week, it is important to address first the religious and spiritual aspects of the month. Fasting during this sacred month was ordained in the Qur’an in a verse that says:

Ramadan is the (month) in which was sent down the Qur’an, as a guide to mankind, also clear (Signs) for guidance and judgment (Between right and wrong). So every one of you who is present (at his home) during that month should spend it in fasting, but if any one is ill, or on a journey, the prescribed period (Should be made up) by days later. Allah intends every facility for you; He does not want to put to difficulties. (He wants you) to complete the prescribed period, and to glorify Him in that He has guided you; and perchance ye shall be grateful.(Chapter 2, verse 185)

It is in the month of Ramadan that the Prophet Muhammad received his first revelation from the Archangel Gabriel. Therefore, many Muslims spend the month reading the Qur’an and listening to recitations of the holy text. There are also special congregational prayers called Taraweeh that go throughout the month and during those prayers the entire Qur’an is recited. It is believed that within the last ten days of the month the night of revelation called the “Night of Power or Destiny” occurred and many Muslims will spend that part of the month, in particular, in increased prayer and reading of the Qur’an. The importance of that one night is outlined in the 97th chapter of the Qur’an with the name “The Power”:

We have indeed revealed this (Message) in the Night of Power. And what will explain to thee what the night of power is? The Night of Power is better than a thousand months. Therein come down the angels and the Spirit (Gabriel) by Allah’s permission, on every errand. (The night is) Peace!…This until the rise of rising of dawn!

Fasting, as one of the five pillars of Islam, is meant to cultivate heightened spirituality and to demonstrate self-control and will power. Physical abstinence, along with increased prayer and a more intimate relationship with the Qur’an, is suppose to enhance spiritual growth. For many Muslims around the world, the month of Ramadan, is a time of remembrance and of meditation.

Do you think that fasting leads to spiritual growth? Is there a tradition of fasting in your faith? What is the place of fasting in our culture today? Please share your thoughts.

4 thoughts on “Ramadan: The Month of the Qur’an”