This past July 4th weekend, in the mi 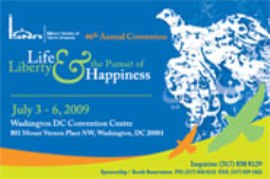 dst of all the Independence Day celebrations, the Islamic Society of North America (ISNA) held its 46th annual convention in the U.S. capital. The four-day conference with the theme “Life, Liberty and the Pursuit of Happiness” attracted an estimated 40,000 Muslims from the U.S., Canada, and other countries. ISNA’s annual conference, considered to be the largest gathering of Muslim Americans, typically takes place on Labor Day weekend; however, with the start of Ramadan in August this year, the conference was moved to an earlier date.

Anyone attending ISNA knows that it is four days of non-stop activity with lectures, interactive sessions, an art exhibit, a film festival, an entertainment event which brings together all different talents of the Muslim communities, and of course the bazaar where you can find anything from books about all aspects of Islam to information on matrimonial sites. Each year’s conference also has special events and this year’s conference featured several, including the Interfaith Unity Reception with the theme “Common Word between Us and You” which aimed to make connections between the three Abrahamic faiths and included a panel discussion between representatives of each faith, in the spirit of President Obama’s June 4th speech in Cairo and Valerie Jarett’s (Senior Advisor and Assistant to President Obama’s Public Engagement and Intergovernmental Affairs) keynote address on the contributions of Muslim Americans. Yusuf Islam, formerly known as Cat Stevens, even made an appearance at the conference. END_OF_DOCUMENT_TOKEN_TO_BE_REPLACED How does a Muslim woman really assert her rights? This seems to be an underlying question in many discussions on Islam worldwide and touches on issues of choice and self-determination. However, questions like this can never be answered in one way because of the diversity of Muslim communities that cannot be defined by one culture, one outlook, one interpretation of faith, or one context. Not only must we address this reality, we must truly engage it and work with the consequences. Although a topic that seems so overly debated, Muslim women’s bodies continue to be a part of different political landscapes. The veil–along with all its numerous manifestations–needs to be critically assessed by women (enough discussions by men) and appropriated in a way to represent what they choose about their faith. END_OF_DOCUMENT_TOKEN_TO_BE_REPLACED