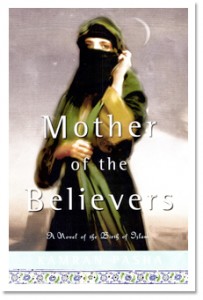 Update – This program is now available for streaming and free download from the Inside Islam archive.

What do people know about Ayesha, the youngest wife of the Prophet Muhammad? Her age is the focus of any discussion and seems responsible for the controversy around her. Many, however, do not know the extent of her influence on the history of Islam and the role she played in preserving much of what we know about the Prophet Muhammad. Ayesha was a teacher, a political leader, and a warrior.

Kamran Pasha, a Muslim Hollywood screenwriter and television producer and author of Mother of the Believers: A Novel of the Birth of Islam, will join us on our next Inside Islam radio program (July 21) to talk about Ayesha’s story. Mother of the Believers tells the story of the rise of Islam through Ayesha’s eyes. This novel brings to light the complexity of this young woman, her love for Muhammad both as a Prophet and a husband, and the pivotal role of Muslim women in the expanding Islamic community.

What do you want to know about Ayesha? Do you think she’s important and why? What does she symbolize for Muslim women? Please share your questions and comments.

11 thoughts on “Ayesha’s Story: Mother of the Believers”